So, what’s next for this blog?
I guess I could flesh out the family picture. As you should know by now, Blanca was a classroom teacher, and I was a nurse. We have four adult children, all of whom still live in Texas.
Arthur (aka, AD, from his radio days) is the oldest, and is married to Anissa; they live in Austin, where they both work for the State of Texas. Arthur graduated from UT, and Anissa from Texas State University. They have been married for all of six months. We were there! See photos on Facebook, and other places.
John, Jr. (aka, Johnny), is next. He is married to Brenda, and they live in El Paso, where Brenda is a school nurse, and John is a Farmers’ Insurance Agent. He graduated from the University of Phoenix, just last year, and Brenda graduated from UTEP. They have four kids, Bryan (aka Boru), our oldest grandchild, very soon to be 17, then, Mikey, Kaela (soon to have her First Holy Communion), and Kirsten.
Our daughter, Blanca, Jr. (aka Ikis), is next, and she lives in Arlington, Texas, with her husband, Julio Castrellon, and their two daughters, Tristen and Aislynn. Julio is just about to graduate from University of Texas at Arlington, and Blanca hopes to continue her university education, very soon.
Our baby is Andrew (aka, Bucko), who is married to Cassandra (aka, Casey). She graduated from Texas State University, and Andrew has studied at ACC, and holds a bunch of the high tech certificates for computers and stuff (no, he’s not a geek). They live in Austin, where Andrew installs AT&T’s UVerse systems, and Casey sells real estate, when she’s not taking care of Baby O, Olivia, their one year daughter.
Commonalities here? Lots of nick names, huh? I should tell you that Blanca is known to her family as Pipis. I answer to Pops, Grandpa, and just about anything that ends with beer? (the question mark is important because that indicates that someone is likely offering me one). AD, Bucko, Casey, Ikis, and her two daughters have all been here to Costa Rica, at least once. Ikis and the girls are expected to be here again in June. We are also hoping to welcome Bryan for his first visit here, this coming summer.
Wow…….that’s us. Of course we each have siblings, and one of them you’ve already heard about (Fernie). More will be introduced as we go along, I’ll bet. Compadres, amigos, cousins/primos, and various and sundry others will be in and out, as well. And, we have made more friends here in our little community, and actually have a busier social life than we’ve experienced for many years. So, some of that will undoubtedly find its way in here.

As for the "picture," referred to, above, here it is: 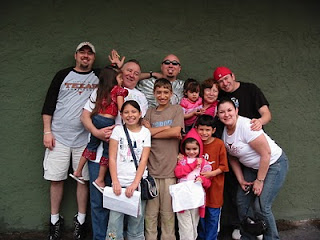