I grew up in the 1950's in the state of Washington. We lived all over the state, mostly in rural and small town settings. My father worked in lumber mills, on dairy farms, and wheat ranches. We never stayed in one place very long because he was an alcoholic, who just could not keep a job. I did not see a black person until I was about 13 years old. I knew very little about the rest of the world, other than what was taught in the various schools that I attended. I was aware that there had been a Civil War in the U. S., and that the primary issue there had to do with slavery, and that the pro-slave folks (if you will) had lost that war. I was also aware that we had very recently fought and defeated Nazis and evil little yellow men all over the world, and it was thanks to people like John Wayne that we had wrested most of the U. S. A. away from Native Americans.
The thing is, I knew as a child that the south had lost, Nazis were bad, and there was nothing inherently wrong with anyone whose skin differed from mine, including those little yellow men. I was even ignorant of any Biblical mention of slavery because we did not attend any church.
I was not aware of all the homage paid to "the fine traditions of the Old South," or the "Glory" of that Old South. I do remember reading about Stonewall Jackson and various Southern Generals and leaders. But, I also recall reading about Lincoln and Grant and Sherman. We did not have Confederate monuments, or any monuments dedicated to that Civil War, because our state wasn't much settled at the time of those events. We were very much more aware of The Spanish American War, and Teddy Roosevelt, and WWI, and of course, WWII.
Big days in our calendar were - believe it or not - May Day (as in, the rites of Spring and flowers; nothing to do with labor), Memorial Day, Arbor Day, and of course the 4th of July, Thanksgiving and Christmas. I still remember my mother referring to Armistice Day, and seeing my father always buy a poppy for that occasion. Of course, that turned into Veterans Day during the 50's, because frankly, the farther in time we got from that First World War, the fewer people still lived who were even alive during that time. My point in mentioning these days is that none of them included Confederate Hero's Day, or Jeff Davis' birthday, or any such celebration of either the Civil War or the Confederacy.
I do recall that there was obviously an effort to glorify those events all across the country, though, because of movies and television. The very term, 'rebel,' was used as a euphemism for hero, in many movies, up to and including the short lived "The Rebel," starring Nick Adams, in 1959. Rebels were seen most often as lone good guys going up against many bad guys. The good guy theme was common in movies and TV dramas that portrayed rebels as those who came west in the years following the Civil War (because their beautiful homes had been destroyed by evil northerners), and it was they (former Confederate soldiers) who were often the ones who famously settled the American West.
So, I suppose I was aware of attempts to glorify certain aspects of the old south, but only in that limited area dramatized by Hollywood.
I guess what I want to say here is that I have never quite grasped this entire "The South Will Rise Again" philosophy, or seen the need to try to bring to life a world that never really existed. The idiots who want to parade the flags of that lost cause have some kind of wildly distorted idea of what that old South really was. They somehow believe that a restoration of the miserable Confederacy would guarantee them a better life. It's like somehow they would miraculously be moved out of their falling down trailers, and into mansions, each and every one. Of course, the reality is that, as long as they feel that they can look down on someone else, anyone else, they feel better about themselves. And, let's face it. If you live in a trailer, surrounded by falling down appliances and vehicles, and overgrown weeds, a slave's life has to look worse than your own.
Posted by jdocop at 11:38 AM No comments:

Saturday evening, as guests of some long time friends who live in Cd. Juarez, we ventured out from our home, and across the border, to Cd. Juarez.  This was our first time to go across the border for strictly social reasons since our return to El Paso in 2012.  For what it is worth, that is something we used to do two or three times a month, but for many reasons just don't do anymore.
We went to a place called "Viva Mexico," Viva México Restaurant, a restaurant that is located very close to the Free Bridge, also known as the Cordoba Bridge, in what used to be a small shopping center.  They feature a pageant of sorts, much like El Paso's "Viva El Paso."  They offer a full menu and following adequate time to eat, they put on a spectacular show that features folklorico dancing, singing, charros on horseback, some very talented lasso work, and even a Juan Gabriel wannabe.
They advertise that the show on a Saturday begins at 9:30 PM, and they recommend that you allow two hours before the show to give you time to eat.  We were a bit late for our reservation, so we did not get good seating.  We were stuck up on a tiny second floor balcony, overlooking the entire restaurant and stage, along with a large group of about eight people, and two different groupings of four (the groupings of four consisted of two separate parties, as one ate and left part way through the show). 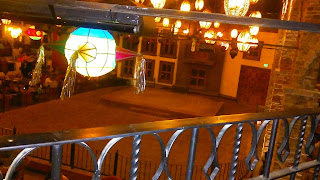 This was a view of the floor and stage.  The raised area is the stage, and the flat area surrounding it is sand, for the horses.  This was taken from our table up on the second floor balcony.