How I became the Roadkill in Boerne, Texas

When I changed the name of this Blog a few years ago, I did not expect to do much more than see the occasional alligators (bits of rubber from truck tires strewn along the highway) and roadkill, as we make our way around Texas.  But, due to a leaking heater hose this past Wednesday (December 13), and the bad luck to choose the wrong automotive repair facility, I became a part of that roadkill.

We left Schertz early that morning, and for the first time, I tried a short cut, using FM3009/Natural Bridge Caverns Road, to TX1863, through the town of Bulverde, up to SH46, and over to Boerne.  Unfortunately, I drove a bit too fast near the Johnson Ranch Elementary School, in Bulverde, and was stopped by a local policeman.  He was super kind, as soon as he realized that steam was pouring out from under the hood of my minivan, and he used his flashlight to help me locate the source of a leak (heater hose), and suggested a couple of places to seek mechanical help.  He also - most kindly - let me off with a warning.

I was not able to find either of the shops he referred me to, and ended up turning into a place on the way out of Boerne, called Two Fat Guys Complete Automotive Service Center.  I knew, going in, that I was at the mercy of this place, and I have to now say that I pretty much allowed these two fat guys - neither of whom I met - to have their way with me.  The young man who provided the counter help to me was named Alex Minozevski, and a Val Minozevski also had something to do with the repairs on my minivan.

Featured prominently on their written estimate is their price guarantee:  "If you find a lower price on any of the services shown above, let us know and we will beat it!  Guaranteed." 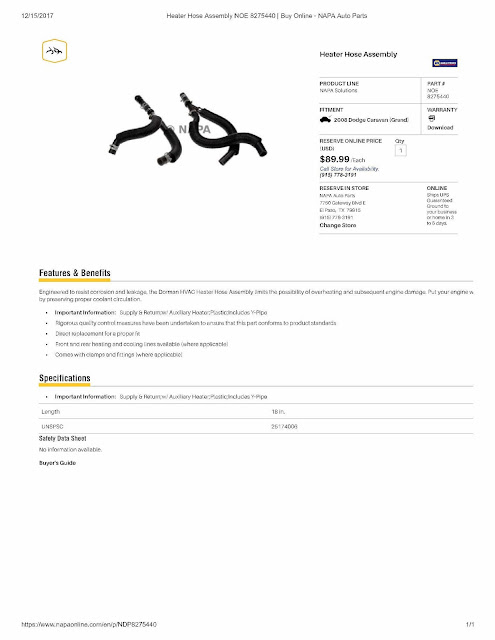 So, why would you have such a guaranty, and then turn right around and gouge a customer to such a remarkable degree?!  I have called and talked to young Alex a couple of times, late this past week, and he did offer a credit of one hundred dollars, but when I followed up to ask when that would post, he said he could only pass this along to his boss, as he himself is not authorized to post credits.  And, yes, he is the one who posted the charges to my card.

Even the Cadillac dealer to whom I used to take my Caddy rolled the diagnostic cost into the final repair bill, and I think that charging me separate labor costs for the flush and the actual hose replacement is twice what should have been right and proper.

I spoke to Valerie at their main location on Monday morning, 12/18, and found her to be just as mealy mouthed as Alex, who I suspect is her son.  She says that their guarantee is only for services, and is only honored if one has the time and the means to physically obtain written estimates from their local competition, and has nothing to do with their price gouging for parts.  She tried to justify their 300% markup on my heater hoses, but I am not buying that (Oh, wait!  I did so buy it!), and claimed that she has already issued me a credit via my credit card, but so far nothing shows up at my bank.  Ultimately, that credit of $112 did come through, reducing my total hit by that much.
Posted by jdocop at 4:07 PM No comments: