I guess my expressed opinions and beliefs have attracted a number of atheists as my Facebook friends.  That's OK.  We do still live in a free country, despite what certain GOP asshats would have us believe.  But, one thing that troubles me about atheists is this.  They seem as desperate to defend their position as a dedicated evangelical is to convert others to their belief system.  Proselytizing is still proselytizing, you know.

One of the positions that these people take is that anyone who believes in a heaven, or any kind of afterlife, is being extremely self-centered, or egocentric.  They try to say that once you're dead, you're gone.  Poof!  Some of them go on about how you will be absorbed into the greater universe or some such crap.  But, essentially, they want to dissuade you from believing in anything after this life.

Here's the thing.  I am self aware.  I am indeed very egocentric, because I have been aware of myself and everything in my world has always been seen from MY perspective, and I really do not see how any of us can expect that to change.  I have to quote Spock on this, and say that any idea where my ego, my "self," ceases to exist, on some level, after death is just illogical.  What the hell is the point of making me self aware if that "self" is going to just end?  Not logical at all.

So, if it is all the same to you, I'll stick with Descarte on this issue.  "Je pense, donc je suis."
Posted by jdocop at 9:53 AM No comments:


We went across the border yesterday morning to purchase two macetas (flower pots; in this case, a large size for a large plant, not necessarily a flowering type) to take with us on a road trip this coming weekend.  We already had two, and needed two more, to fulfill a commitment to our son, who we hope to spend some time with on this trip.

We found a place that sells them, and made our purchase, and then got in the very long line to come back across into El Paso, at the Ysleta Border Crossing Station.  This used to be a very routine kind of trip to make, and we used to go over at least once a week.  Once upon a time, the U. S. Customs and Immigration station at this location was a simple little building, with a simple two lane road, pretty much like this old photo, from 1962: 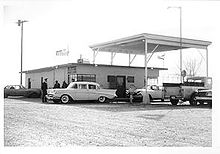 Of course, in this post 9/11 world, crossing the border is no longer a simple thing.  The lines are very long, and the wait can be more than an hour.  Then, of course, after the long wait just to get up to the booths where the CBP agents are, we have come to expect to be treated with less than the respect due to our age and status. 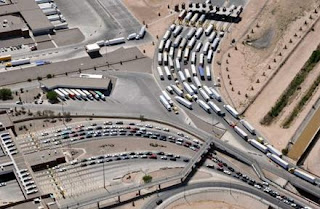 Well, yesterday we were in my new/old Chrysler Town and Country minivan.  I just bought it a couple of weeks ago, and applied for the plates the day before, so it still has the temporary paper permit on the rear, that the County Tax Office gave me.  This is because I requested the special license plates that show me to be honorably discharged from the U. S. Army, and it will take a couple of weeks for those to be mailed to me.

As is the routine, yesterday I handed over our passports to the female agent, and opened the side door of the van at her request.  She went inside her booth, to her computer, and then, went over to the agent in the next line, and then came back, handed me my wife's passport, and stuck mine under the wiper on the driver's side, along with a yellow piece of paper.  She told us to pull ahead, under the large canopy, to station number four.

Under the canopy (which would be to the left side of the above photo), I parked at number four.  An agent came by, and told me to turn off the engine, and give him the keys, and he walked away.  We watched and waited as other vehicles were parked at nearby stations, and agents strolled by in groups of two and three, chatting and laughing, and we waited and waited.  At some length an agent with a dog came by, and he let the dog sniff around.  We asked him what was the delay, and why  nobody had told us anything, and why we were just there waiting, and he was only able to tell me that he would ask.  He also said that they (the many agents, in uniform, wandering around, chatting and visiting with each other) were not "allowed" to inform us as to any reasons for our delay.

Finally, more strollers came by, and - being less than happy with this entire process - I started asking questions:  "Are we being detained?  What is the reason for this delay?  Why are we waiting here?  Would you treat your parents like this?"  The agent to whom I posed these questions, of course, did not seem to appreciate my line of questioning, and he said something about "You're entering the United States from a foreign country, so you and your vehicle are subject to search and questioning."  (nobody searched, unless the dog walking around the van, and the female agent's cursory glances into the side and back of the van constitute a search).

Frankly, as best as I can determine, questioning by agents of CBP are supposed to center around possible illegal immigration and/or smuggling -  (https://help.cbp.gov/app/answers/detail/a_id/176/~/cbp-search-authority). - I would submit that we already let them see what was inside our van, and we had already provided their agent with our passports.  I would point out that the best information that I can find regarding the authority of these people seems to focus mostly on immigration issues, as well:  (http://immigrationpolicy.org/just-facts/authority-us-customs-and-border-protection-agents-overview)

Ultimately, he told me that the previous owner of the vehicle had had a problem when crossing the border, so they had to check us out.  Granted, I did not have the papers from either my recent purchase of the van, or from my picking up the temporary license just the day before, but frankly, I had no idea that those papers must be in the vehicle!  I must point out that the vehicle does have a current window sticker, and the temporary tags issued by the State of Texas.  I guess my problem is that I simply cannot understand what I, or the vehicle, for that matter, have to do with any problems the previous owner might have had with these people!

At length, we were finally told we were free to go, and we came on home.  But, I have to say that I really, really hate what we have become as a nation.  Cd. Juarez used to be our "sister" city, and we all felt free to come and go across the border, for all kinds of socializing and shopping.  I find it very hard to accept the fact that this kind of thing is no longer possible.  Frankly, I am left with the feeling, more and more, that the U. S. CBP, or whatever the hell they call themselves, is not at all interested in much beyond throwing their weight around.  Each time I have to interact with these people, I am left feeling like a second class citizen, and I resent that very much.  Why are these people not able to show the slightest bit of courtesy?
Posted by jdocop at 8:19 AM 1 comment: