Flat Stanley came to visit us!

Well, before I get to bringing things up to date, I guess I need to acknowledge our most recent visitor. Flat Stanley (no, I did NOT mean to say, ‘Fat’ Stanley) arrived at the post office in Nuevo Arenal two days ago. It seems that this is a person who somehow was flattened by a bulletin board. Julian Bustillos, the youngest son of one of our kids (Adrian Bustillos, aka, Shadow, or Sombra), is in the second grade at Blackland Prairie Elementary School, in Round Rock, Texas. He has sent Flat Stanley to me, in the regular mail (we had all but forgotten that ‘snail’ mail still exists, because all we have used for nearly a year has been email).

Stanley was accompanied by two letters, one from Julian, and the other from Julian’s teacher, Mrs. Candi Tenbush (I won’t say it! I won’t say it!). These letters explain that Stanley was still able to do many things despite having been flattened by that blackboard, including travel. So, he has been sent to us, here in Costa Rica, so we can take pictures of him around our area, to show his new adventures. Also, we have been asked to talk a little bit about what Stanley has seen, and is seeing here. 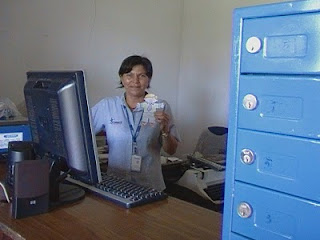 This is the lady at our Nuevo Arenal Post Office (better known here as Correos Costariccenses), who called me on the phone as soon as Stanley arrived two days ago. Her name is Señora (that means Mrs.) Giselle Solera Marinda, and she is the lady in charge of our Post Office. After I picked Stanley up, and brought him home, we started to plan what we wanted Stanley to see. But, first we had to show him the view from our yard, looking down at the Lake: 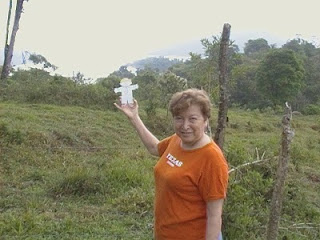 Unfortunately, you really can’t see the Lake in back of Blanca (by the way, did you notice her Texas Longhorns shirt?), but there she is, with Stanley, as she showed him our property, and ‘our’ Lake Arenal (Laguna Arenal). That was just two days ago, April 6, 2010.
Well, we still have a lot to show Stanley, but so far haven’t had a lot of time. We did take him to our Plaza, in Nuevo Arenal, yesterday morning, so he could see the plaque there. The plaza is right in front of the Post Office, and in back of it is the Church. 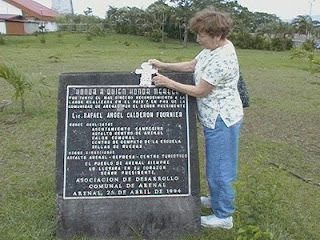 Blanca is translating the plaque to Stanley:
“Honor to he who merits honor.”
Therefore the most sincere recognition for the work carried out in the country on behalf of the community of Arenal is given to Mr. President Rafael Angel Calderon Fournier.

Works realized on behalf of the community:
Rural settlement
Asphalt paving in the town center
A community Center building
Computer center in the school
Wheelchairs

Financial assistance came from local merchants, and the town of Arenal will always have the President in our hearts.
The Community Development Association of Arenal, in Arenal, on April 25, 1994.

We were so excited to have Stanley visiting, that we let time get away from us, and now, it looks like we can’t show him our famous volcano (El Volcan Arenal). We have had two days of rain and clouds, and it is hiding behind the clouds, across the lake, and won’t come out again until we get a lot of sunshine.
We have also showed Stanley our little house, but don’t have a picture of it yet. Oops…..
But, here is one of our famous volcano, 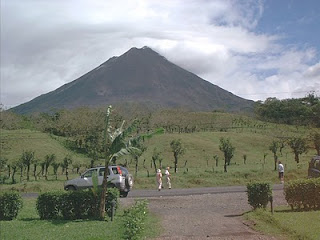 that we did show Stanley. It is called Volcan Arenal, in Spanish, and in English, The Arenal Volcano. We had to drive a ways to actually see it because of the clouds. Costa Rica has many volcanoes, most of which are currently active. Arenal Volcano has been active since 1968, and is the world’s oldest active volcano. At night people can seen the red hot lava, and sometimes it grumbles, and throws big, big rocks up into the air. This (below) is what it looks like from all the way across the Lake (closer to where we live). Oh, by the way, you can see many more pictures of the volcano at this place:
http://www.arenalvolcano.com/picture_gallery.htm:

Costa Rica is also famous for its beaches, and there are many of them within about two hours of our house. But, before we get to the beaches, we drive very close to this beautiful waterfall, which is called, in Spanish, Cataratas Llanos de Cortez, or the waterfall of the Cortez Plain. This waterfall is located near the city of Bagaces, and it was just a short distance off the main road: 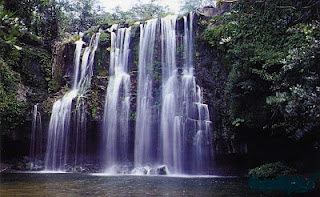 Then, we were able to show Stanley this beautiful beach, PlayaTamarindo, or Tamarindo Beach: 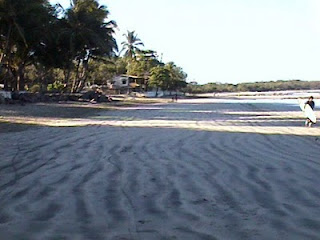 I took another picture just as the sun set one evening. You can’t see Stanley, though, because he is hidden in the dark: 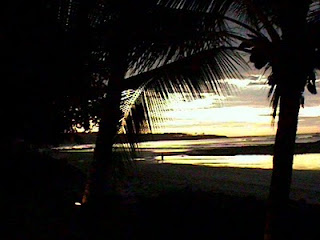 There are so many more things we could have shown Stanley, but we really need to get Stanley on his way back to where he came from………..so, we are going to see if we can’t pack him, and his new clothes, and some postcards all together, and mail them back to the U. S. of A., to return to Round Rock, Texas……Maybe if you have the time, you can look up Costa Rica on the internet, and see pictures of the beautiful flowers, and the many, many kinds of birds that are here.
Posted by jdocop at 2:53 PM