"The Beat Goes On"

Part V, we’re still in Goldendale………
Another kid I spent time with was Paul Nehmi (I think that was the spelling).  He was rich, by my standards, because his father was the manager of the local Penny’s store (as in, J. C. Penny), and he lived some blocks away in a modern house.  Not only did they have indoor plumbing, but his mother cooked on an electric stove!  One interesting side note about Goldendale comes to mind:  Basketball was big stuff in this little town, with a population of around 2500.  The coach at the high school was worshipped, and his program encompassed the entire town, with the P. E. coaches at the elementary and the middle school, working hard to bring the younger guys along, so as to get them ready for the big kid’s game.  All games were broadcast on the radio, and it was a given that Goldendale would go to State each year.  At that time, schools at that level of competition, like B (?) went to their State Tournament in Tacoma every year.  The bigger schools of course had their state tournament in Seattle.
Later, when I was a senior in Tacoma, I skipped school and attended some of the games at UPS’ (University of Puget Sound) Field house, and saw some of the guys I had attended grade school with, now in the big show.  By that time the former coach from Goldendale had ‘made good,’ and had become coach of the basketball team at UPS – Coach Bud Wilkerson, or Wilkinson?
We stayed in that small town, in the same rented house until the night Mike graduated high school (I had just finished 7th grade).  I recall that Mike had been awarded a medal (sponsored by Bausch, as in Bausch and Lomb, I believe, for outstanding Science achievements).  But there was no time to even congratulate him on his achievements, as we were all herded aboard a Greyhound Bus that very evening, and ended up back in Tacoma (of course, I did not know at that time that we had lived in Tacoma before), this time at my paternal grandfather’s home (for some reason he was never grandpa or grandfather, but instead, he was called Granddad by all; no, it is not likely that this had something to do with that most excellent Bourbon, Old Granddad, because that is good stuff, and I don’t think he could afford the good stuff anymore than the old man could).  We stayed with him and his second wife (Margaret) for that summer, and then moved to a rental house just before school started that fall.  It was while we lived here (N. Division Ave., is all I recall; just two doors from Frisko Freeze, the best burgers and shakes anywhere) that we got our first television.  Naturally, it was a used one, with a big wooden cabinet, and a very tiny screen. Remind me sometime to tell you about what we watched on TV in those days, and, now that I think of it, at the same time I can write about what I remember from the radio in those years before we had TV, and our first record player, and first records. 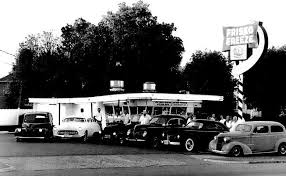 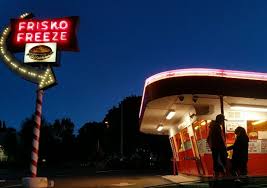 Frisko Freeze at Night (the way I most often saw it)

We actually stayed in that house all through my 8th grade, and most of my 9th, then moved to yet another rented house, in another part of town.  Now that I think of it, however, there are a couple of things about this house that come up in my memory.   This house was actually sort of special, in that it had some unique features in – of all places – the bathroom.  The countertop was stainless steel, and the bathroom was overly large, with a separate stall for the toilet.  The story was that this had been a house of ill repute (how appropriate) and a busy ‘entertainment’ center during the years of prohibition.  Maybe that is why that upstairs bathroom was so fancy.
There was something else about that bathroom that was special.  Now, what was that?  Oh, yeah, this was the bathroom where the old man passed out while on the toilet.  Keep in mind that most of my younger years feature this memory of a mean, mean drunk.  The mean drunk who, when in his cups, and at his ‘best,’ would look at you with serious mayhem, if not murder, in his eyes, just for coming within eyesight of him.  He would also mutter incomprehensible drunkenly slurred things to himself while ‘at his best,’ as it were.  And, basically, you knew better than to get within easy reach of him.  Then, of course, when he was on a real tear, and was beating up on the old lady (who never did learn to leave well enough alone), you would try to plead, grab an arm, or somehow get him to stop (and, her, too, because she was usually just about as drunk as he was by this time).  He never did until he passed out, and peace descended upon whatever shack we were living in at the time.
Well, let me tell you, when he passed out on the toilet, and wound up laying on the floor, with his pants at half mast, and with the slobber running down his chin, a lot of the fear dissipated.  I only wish somebody had a camera, and that we could have preserved that image for posterity.  Of course, today, such a thing would be a no brainer, ‘cause every frickin’ kid has a cell phone with a camera built right in, and that sucker would have been all over you tube and facebook, and the internet within minutes.  I guess that’s one nice thing about progress.  No, I did not own a cell phone at the time I wrote this (and, if I still had kids at home, the only way they would have one would be if they went to work to earn the money to buy their own damn phone, and to pay the damn bill, too)!  Well, that was one of the fonder memories of that house.  But, you know, the fun has to end sometime, so……..
We moved again before my sophomore year of high school, requiring me to attend a school different from where most of my friends were.  Actually, there were two moves.  First, south of down town, and the huge gulley that runs through the middle of Tacoma, kind of east to west, to a small place a block off Pacific Avenue (maybe on Wright St.).  We only stayed here a few months, and I seem to remember we had to ride the city buses to and from school, up until the end of my 9th grade.  This place was memorable mostly for its proximity to King’s Roller Rink, where I learned to roller skate, and where Dennis and I (and, likely David and maybe, Pat) had some good times.  Then, before my sophomore year began, we moved again, way north, to North Verde Street.  We pronounced it as ‘vurd,’ because we did not know that this is the Spanish word for the color green, pronounced as vair-day (accent on the ver).  After the end of that school year, we moved yet again, to the first (and only) house that my parents ever tried to buy, located at 625 North Cushman Avenue. 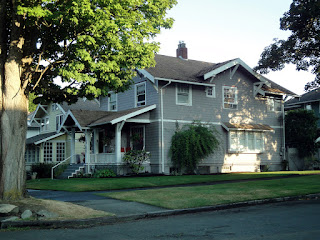 I was in heaven, but that’s another story.  We stayed in that really special (for me) place all through my junior year, up until the last month of my high school, while I attended one of the most special high schools anywhere (which is yet another story, but look it up on the ‘net; it was featured in the 1999 movie, 10 Things I Hate About You), Stadium High School.  Meanwhile, Pat and Dennis both graduated from that school one and two years ahead of me.  We’ll pick this up again, when Part VI gets done………… 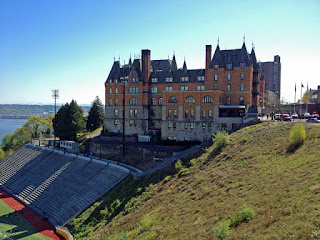