Moving On From High School

Part VII, Tacoma was just about done…..
The end result?  Two totaled cars, the Chevy and the Chrysler, and a pretty hefty fine for brother Mike.  I was ordered to get a driver’s license, or more correctly, my parents were ordered to make sure that I got one.  There was a certain irony in this, as I had taken driver’s ed at school (in those days it was offered at no cost, as a regular part of the high school curriculum, believe it or not), but had not been able to go for my license exam, since there was either no money, or the old man wasn’t available to take me.
OK, back to the next move……..At any rate, we lost that house late in my senior year, and moved into the “projects”.  The sequence of events was that we had to move out before the old man even got out of Steilacoom, or, possibly he got out one day, and the next day, we moved.  I think this area that we moved to was called Hillside, but I am not at all sure.  We only stayed there until I finished high school.  Actually, we moved the day after I graduated from high school, to a small town (Enumclaw) almost due east of Tacoma, making it southeast of Seattle.  I stayed with my parents mostly because I had no clue as to what to do with myself.  I certainly was never encouraged (or informed enough, for that matter) to look into going to college, so I rather foolishly and desperately looked for work.  If you recall the time, you would realize that I had a monster bulls eye on me that said something about cannon fodder (but, then, that term is probably too old for this era, huh?), since I was ripe for the Draft.  I eventually ended up obtaining some limited training under the Manpower Development and Training Act of 1964 that purportedly had me ready to seek gainful employment as an attendant in a Mental Health facility.  This was at Rainier State School, in Buckley, Washington, very close to Enumclaw.  In those days, almost all mental health facilities that were not exclusively private, were State run, and therefore often had pretty bad reputations.  Think of the Academy award winning movie, with Jack Nicholson, One Flew Over The Cuckoo’s Nest.
Meanwhile, after the next school year ended for my younger brother, David, we moved yet again, back once again to the Eastern part of the state.  This time we moved to a town called Moses Lake, near the boom town (a pretty large area of what had formerly been mostly desert enjoyed something of a boom due to the increased irrigation provided from the nearby Columbia River) of Othello, WA, where my father had gotten a position as a bookkeeper in a frozen food processing plant (peas, corn, etc.).  He got me a job as a forklift operator, and I worked most of that summer a full year after I had graduated (graduated in June of 1964; this was 1965).  I was able to buy my first ever car, a 1954 Ford Crestline Skyliner.  I had a choice between this car and a 1952 Cadillac, two door hard top.  The price for the Caddie was something like $150.00, and for the Ford only $125.00.  I bought it and never looked back.  Now, the car did not- ever – look as good as the below photo, but it was not all that bad, either.  Mine was two toned, blue and white, and had been converted from an automatic transmission to a stick.  This resulted in a three speed, on the floor, with a cheap knock-off of a Hurst Conversion, that had been installed backwards (forward should have been first gear, but was actually reverse): 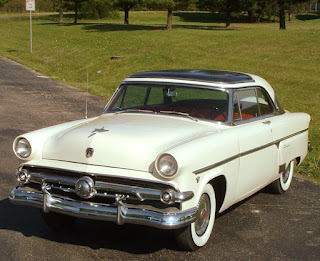 1954 Ford Crestline Skyliner – note the plexiglass roof (wasn’t called a sun roof).
I finally got smart enough to leave home (or, finally reached the point where I just couldn’t take it anymore) late that summer.  OK, here’s what happened:  While I was working at the plant, I opened my first ever checking account, and that is actually how I was able to buy the car when I did.  My best friend, Rich Oxley, had come up from California, where he was going to college, to spend the summer, and to work with me.  After the plant had processed all the peas in the area, and before it switched over to the next crop, which I think may have been corn, we had a short break, so the plant was closed.  Rich and I took off on the Greyhound to go see some old friends (former neighbors of mine, actually) in Tacoma.  This family had a place on one of the many lakes near Tacoma (I think Spanaway), and we stayed with them.  These were the Cresos, mom, dad, daughter, Connie, who was maybe two or three years younger than us, two smaller boys, and another girl, who was our age, who lived with them, and served as sort of a nanny to the little boys.
While Rich and I were there, I got the opportunity to buy that Ford, and I paid for it by writing a check.  Rich decided that he did not want to go back to Moses Lake with me (I wonder why), so I drove back on my own.  Upon my arrival, I first learned that my father had lost his car to repossession (like that never happened before).  He had been driving a ’57 Chevrolet since we had lived in Enumclaw.  Not only had he lost his car, but when I took him and me to work the next day, I learned that my job was gone, and I had been demoted to scraping the spills off the plant’s floor (it seems that the nephew of the plant manager needed my job more than I did).  So, I was, of course pissed at this, and immediately quit.
Somehow, the old man hustled the management at the plant to help him find another car.  This necessitated a road trip down to Hermiston, Oregon (might have been Umatilla).  So, I took him, my mother, and little brother David in my car down to that place on a Sunday.  The people at the plant had arranged for a dealer in Hermiston to give the old man a car, with the understanding (I guess) that they would stand behind the deal.  He picked out a Rambler station wagon, maybe as new as a 1960 model.  This was actually a pretty decent car, especially for him.  At any rate, we then drove back up to Moses Lake, and the next morning after the old man had left for work, I packed all my earthly possessions into my car, and took off for Seattle.  I hope that I called Mike first, to warn him that I was on my way, but that was the end for me.  I did not see the folks again until after I was out of the Army, and married.  And, I did not want to see them.
It was after I moved in with Mike that I learned that the old man had found my check book (the spare checks, anyway) while I was gone on that trip to Tacoma.  I guess he had decided that he needed some of my money more than I did, so he wrote a check on my account.  The bank naturally came after me, but since I had one of the world’s worst chicken scratches for hand writing, it was very easy for them to see that someone else had indeed written the check (of course it bounced; my money went for my car).  I did tell the bank to look for him, though.
Well, as I say, I was fortunate enough to be able to live with my oldest brother, Mike, in Seattle.  I even got a job as a Ward Attendant at a state school in Seattle, in the early fall.  Unfortunately, I also got my draft notice not thirty days after beginning my new job.
I spent three years in the Army, going from Seattle to Ft. Ord, California, for my Basic Training, then to Ft. Dix, New Jersey, for Advanced Infantry Training, then Ft. Gordon, Georgia, for Field Radio Repair School, then to Korea for thirteen months, and finally, I was stationed at Ft. Bliss, Texas, until I was discharged in late 1968.  It was while at Ft. Bliss that I met Blanca, and we were married a short five months after our first date.  Here is where we were married on June 22, 1968: 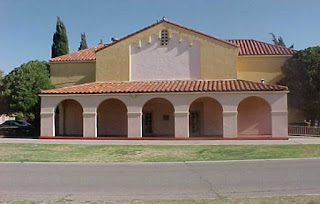 
We did move to Seattle after my discharge, and I went to work for Boeing as an Aircraft Electrician/Installer.  We only stayed there for about 14 months, before returning to El Paso, mostly because Blanca was miserable so far from home, language, diet, family, and so forth.  So, let’s take a break, until Part VIII……..
Posted by jdocop at 2:37 PM