My High School Years, up to a point 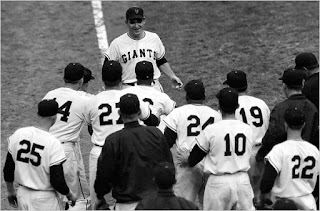 That’s Dusty Rhodes, coming home after hitting a grand-slam in his first ever World Series game, 1954.

Just when I thought things were going just fine, my old man went from bad to worse.  I never knew any details, but late in my senior year, he ended up in the Western State Mental Hospital’s alcoholic ward.  I have long suspected that this was deliberate on his part for two reasons.  He was indeed an alcoholic, but he never was serious about fighting it, so right there – even then – I had to wonder.  He was in trouble yet again with debt I believe, and had undoubtedly lost yet another job.  With him in the nut house, obviously, there was no way to pay the mortgage, or anything else.
While the old man was in Steilacoom (an old fort by that name had been turned into Western State Mental Hospital), I wanted to attend one of many parties one evening, and the car was in the garage, but wouldn’t start.  Mike had come home from the Army by this time (actually, I think he most likely ponied up some coin so that the folks could buy that house, in the first place), and was living at home, while working at the Tacoma Public Library (yes, he was instrumental in my having secured a part-time, after school job at the library).  Mike was the proud owner of a 1952 monster of a Chrysler.  I’m talking tank-sized, four doors, and a great big in-line six cylinder engine.  His car was running just fine, but he had a previous engagement, likely a date.  There was a light rain falling.  The sun had just set.  Now, he should have known better (after all, he was a U. S. Army Veteran, right?  And, he was over 21 by this time, too!), but neither one of us was thinking very well that evening.  We somehow hooked up his front bumper to the rear bumper of dad’s 1956 Chevrolet (Bel Air, four door, but with that really wonderful 256 cu. inch V-8, for which Chevy received a lot of recognition).  We had to pull the Chevy backwards, up out of the garage, because (at least in my recollection) there was a bit of an incline from the street down to the garage.
Well, we got the Chevy up onto the street, and pointed along the street, heading north.  For you younger people who don’t know these things, let me tell you that the windshield wipers on 1950’s cars were not powered by an electrical motor, but by a vacuum motor, that only could work when the engine was running, and able to create a vacuum.  In other words, in case you need more explanation, if the motor wasn’t running, there was no way to move the wiper blades, so as to keep the windshield clear in the rain.  Did I mention that there was a light rain falling?  And, to make matters worse, did I also mention that the sun had just set?  So, no wipers, and no headlights, right?  This is not reason enough, so let me also point out that the Chevy in question had an automatic transmission.  We did not have jumper cables, but we figured that we could get that sucker going on compression, which for an automatic transmission requires a minimum speed of 30-35 miles per hour, pushing or towing.  We didn’t have the necessary chains or rope for towing, so we elected to get this thing running by Mike pushing it with his monster Chrysler.
I would have to freely admit that the primary responsibility for what happened next would be mine, since I proposed to be behind the wheel of the ‘lead vehicle,’ as it were.  We started off, and got up to a pretty good speed, within about 50-60 feet of our starting point, when I realized too quickly to do anything about it, that I couldn’t see two feet in front of my face.  It was raining, and it was dark!  That’s when the Chevy slammed into the rear – smack dab in the middle, too – of a neighbor’s parked car.  And, he was one pissed off neighbor, too.  I don’t think I made it to the party that night.


I hate to leave you hangin’, but hey, this is enough space for one Part…..we’ll see what happened to those intrepid young men when next we meet, in Part VII……..
Posted by jdocop at 3:11 PM