The search for the elusive "best" burger in town continues

I had read about and heard about a place out in Northeast El Paso called Roscoe's, and somehow thought it was up on North Piedras or Copia.  Turns out, it is not only NOT on either of those streets, but it is not even spelled that way.

Rosco's Burger Inn is located on Tompkins, just between Fort Blvd. and Dyer.  At least it is in the Northeast.  Their signage says they've been doing burgers since 1955, and their little building shows it.  Although well preserved, the little rock structure is typical of a time long gone by.  The bathrooms are outside, around the side, and have obviously been totally redone recently, as they feature new fixtures in very good condition.  The counter, inside, behind which most of the action takes place, is stainless steel, and very clean.  They have a flat top, a fryer, and a deep heating device, where the chili (with beans) is ready to serve. 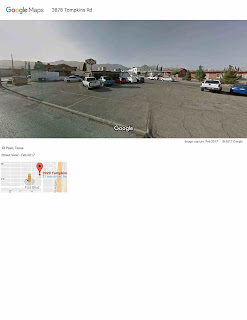 The physical building, with a tiny view of Google Map's location.

Their menu is simple, which is a good thing: 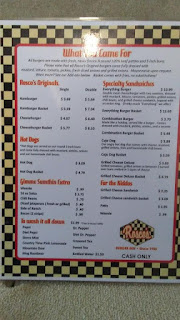 I need to explain here, I suppose, that I was expecting something different, since I had heard about this place before, with high praise.  But, frankly, the full name should serve as a clue to what one might expect to find here.  You see, if you have been around El Paso for a long time, and especially if you ever spent time in the Lower Valley, you are very much aware of our local phenomenon called "Burger Inn."  The original Hamburger Inn, as I understand it, is still in business on McCarthy, just off Alameda, near Riverside High School.  It was owned at one time by one Orlando Fonseca, who was also a City Councilman, way back when.  There used to be other locations, most notably in Tigua, also owned by Mr. Fonseca, and lots of imitators, such as Hamburger Hut, and others, all near or on Alameda.

The standard fare at these places was always a large bun, with a hamburger patty flattened while cooking on a flat top, with lettuce, pickles, tomato, mustard, and choice of cheese or no cheese.  A hot dog at these places also used a hamburger bun, and consisted of two weinies, cut the long way, also heated on the flat top, and served with or without chili beans.  The original is still famous for having menudo all day, every day.

Well, I gotta tell ya that Rosco's lost points when I saw that they used frozen, pre-cut potatoes for their fries.  In my not so humble opinion, if you want to rank in the top tier of burger purveyors, you must use only fresh, never frozen, potatoes that are cut on the premises.  Seriously, the best burger places - for me - include places like Freddie's Frozen Custard and Steakburgers, or In 'N Out, largely because they use fresh potatoes that they cut on site.

Rosco's burger is pretty good for what it is.  A quickly prepared, much-like-all-the-others, generic hamburger.  I always choose no mustard, and ask for Mayo, and they did honor that request, which is worth points, in my book.  They were very generous with the fries to the point that I could not eat them all.  They were well done, but you know there is always a difference between frozen and fresh cut that you cannot mistake.

Overall, I'd give Rosco's a solid 7.5 on a scale of ten.  Not necessarily worth the trip all the way up and over, but certainly worth stopping by when you're in the neighborhood.
Posted by jdocop at 12:56 PM