Part III of the Continuing Saga of the Dungans……

Ever go on a road trip with Garland?  Believe me, this is not something you really want to do, ever.  By the way, this just seemed like a good place to bring this up, right after talking about gas stations.  First of all, Garland smoked.  A lot.  Secondly, he was a pig, what we call in Spanish, un grosero, as in uncouth, ill mannered.  He had a bad habit of ‘hocking oysters,’ which means he would clear his throat very loudly (and grossly), working up a great big gob of (what was it we used to say?  Oh, yeah, “Great Big Gob of Green Greasy Gopher Guts”) this truly viscious and viscous phlegm.  Now, he always drove with his window open, and his left arm out the window.  Once he had this gift for the road ready (we, of course, sitting in the back seat knew this was coming, and were already preparing ourselves), he would first turn his head to his right, and shout, “Duck!”  This was our signal to do just that.  Then he would turn his head back all the way to his left, and send that mess of easily-mistaken-for-road-kill-if-it-ever-gets-to-the-road gooey, slimey phlegm hurtling out his window, most likely to splat on that side of the car (shudder).  Then, he would turn his head back to the right, and say, “Unduck!,” and we would.
Garland’s favorite beer (and, here he actually showed some class, if not taste) was Miller High Life, which of course only came in clear glass bottles.  I seem to recall that there was a deposit on empty beer bottles in those days (a nickel for empty milk bottles, three cents for soda pop bottles, and maybe a penny for beer bottles), but that made no difference to Garland.  As he drove, he drank (surprise).  As he emptied a bottle, his routine was to fling that bottle, not just simply out his window, but out his window, over the top of the car, aiming for the right side of the road, as far off the road as he could get it.  Wasn’t that considerate of him?  His other goal, of course, was for that glass bottle to shatter loud enough so that we could hear it as we drove (merrily? Very seldom) along.  He would then report to us whether the bottle just thrown was a good one (it did NOT break), or a bad one (it broke).
OK, we left off with us living up in the Rattlesnake Hills, above Prosser.  I believe we stayed there in the Rattlesnake Hills long enough for me to get through second grade, and then moved to another ranch sometime in 3rd grade.  After getting this far, Mike remembered some more details, that he has graciously provided in order to set me straight:

Minor exception regarding chickens and churning: First had chickens and eggs on the Rattlesnakes… same with churning butter. Used the butter churn (glass jar with the wooden paddles) and at mom’s direction, we kids took turns turning the crank… hour after hour…. Mom later learned that the cream should be close to room temperature before starting the churn… We had gone from the refrigerator to the churn and it was a tiring – long process. Speculation is that during our long effort, the cream had come up to room temperature and then did proceed to provide butter.

Meanwhile, we had yet to move from the Rattlesnakes, down to the next place on our list.  This was to an area, way down close to the Columbia River, near a little wide spot in the road called Roosevelt.  This is where Mike, Pat, Dennis, and I all went to a three-room school for at least one school year, and possibly a bit more.  There was a ferry across the river there, to Arlington, Oregon, which was the nearest place with such refinements as a restaurant.  That ferry was important, because the second year we were in this area, Mike had to ride that ferry across the Columbia River every day to attend school in Arlington, Oregon, because our little school only went so far, and the nearest high school (heck, maybe it was only the 7th grade; what do I know?) was across the river.  And, of course the proximity to Oregon was a big plus for the old man, ‘cause they didn’t tax booze, beer, and cigarettes as much as Washington did at that time.  And, I seem to recall no sales taxes.  After seeing the map whose link I shared, Mike offered these memories of this place/time:

(4) 19. Ranch near Roosevelt… Think I found the exact on this one… about 15 miles W and one mile S… traced Old Hwy 8 and Sundale Rd [this was after looking at the aforementioned map]… there is (was) [a] substantial orchard called “Sundale” not far down the road and I found a sharp turn in the road and recall the house located there where dad “finagled” [note:  finagled, as in “if you give me some gas, I’ll pay you………….sometime”………..NOT] some gasoline from the resident there… He (the neighbor) had one of the old glass top gasoline pumps where you elevated ten gallons to the top with a pump handle, the glass top was cylindrical in shape and graduated in one gallon increments, then a conventional hose handle affair to your fuel tank.

After that we lived in another country setting and went to a three room school house that was remarkable.  We all had such a great time there.  Of course the house wasn’t much but I do remember churning butter and going down the road to an amazing apricot orchard where they were the size of peaches and the juice ran down our arms. 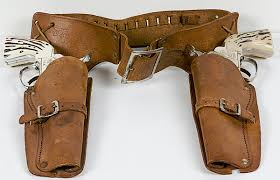 And, I got them!  Even got some caps to shoot with them.  Wow, that was so cool.  At one point Dennis, I think, got a Red Ryder BB gun.  Or, Daisy.  And, on reflection, I think it was a pump action, instead of a lever cocking action, so that would likely make it the cheaper of the two types, I bet.  Here is a pic of a pump action type BB gun, similar to what I remember:

We (Dennis and I) also played all up and down the creek, swimming in pools in hot weather, playing cowboys and Indians, Army, whatever we saw in the movies on Saturday afternoons.  John Wayne was naturally everybody’s hero, but since he couldn’t possibly make enough movies to satisfy our need for him, we kids looked forward to Saturday matinees, when we got into the local theatre for only twenty cents.  We got a quarter to spend, so that left a nickel for (usually) lemon drops.  Those movies included coming attractions (we called them previews), a news reel (short), at least one cartoon, the feature movie, and then a second movie.  There may also have been an episode of one or more serial that everyone looked forward to.  And, just about every kid in town was at that one showing.
We also played baseball with a friction-tape-wrapped ball, and a very old and weathered bat, in nearby pastures using cow patties for our bases.  One of our favorite places to play was near the city dump.  There were some large rocks overlooking the dump itself, and up in the rocks, we found what we thought were caves.  We’d go through the junk when no one was around, and find ‘treasures’ that we took up to our cave, and used to decorate, or furnish the cave.  I also loved to play in the wrecked cars that were parked on a back lot at the local Ford dealer (or, maybe it was the Chevrolet dealer).  That dealership was the closest I ever expected to come to a newer car.


Sorry, but since this is again running long, we’ll take a little break here, and continue the report of the sojourn in Goldendale in Part IV…….
Posted by jdocop at 12:30 PM