A Not So Brief History Continues

Part II  (We left off in Rocky Ridge, and this is from Patty):

There we roamed the woods and played in a creek and had wonderful adventures…walked the train tracks and picked up rock salt to suck on.  We bathed on Saturday nights, the baby first followed by the only girl, and then you boys.  We slept in the loft where the snow filtered in and we had a baby squirrel for a pet for a time.
I think that was where Dennis was bitten by the dog and suffered terrible cuts to the face and had to have the rabies shots etc.  I saw him with the flesh hanging and his fear and all the blood and we were all pretty scared for him.  Thankfully the folks took good care of him.

Then, my recollection is that we moved to some sort of company housing in a small lumber town (Eatonville), followed by a rental house in that same little town.  I started First Grade at about this time, and we moved before I finished that year.  I do remember – vaguely – parts of First Grade, and how easy I found it to be.  I remember that Mike was part of a group of older students who created a massive snowman (or, was it a snow woman?) on the school grounds that winter (there used to be a family photo of this).
This was the school building next to where the massive snowman was built.  The snowman would have been to my left in the photo (your right). 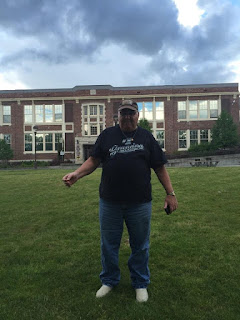 I vaguely recall that there was a building, like a garage, next to the house we lived in, and there was a pretty nice cabin cruiser (as in, a small boat) in there.  And, I remember playing in and on that boat.  There was something else about an abandoned building that had a number of rotten eggs in it, and that is how I know that odor so peculiar to rotten eggs.  Ain’t nothin’ like that nowhere, nohow.
Meanwhile, Mike has offered that I may well have the order of which house we lived in reversed here.  He recalls the separate, stand-alone house first, followed by company housing, second.  Patty remembers:

The next place I remember was maybe Eatonville, a logging town, actually a company town.  Dad being an alcoholic never held a job very long.  He didn’t take direction at all well so this was the root of all the moves we made.  I myself went to 13 different schools growing up, thing was though, we all made the adjustments very well and everyone made terrific grades and made friends wherever we moved.  We just never brought any kids home to play because we always lived in shacks.  [Not to mention that] The alcoholism was too embarrassing to expose anyone to.

Mike, after looking at the map* I referred everyone to, had this to say about Eatonville:
… I recall the other sequence such as free stand shack followed by company (see tar paper) housing off toward the mill pond… (Wow!!! Eatonville has an airport??? Shit, airplanes weren’t yet invented!!!!!!

In my memory, then our father’s work went from the saw mill, to a dairy farm, in another rural area, near the small town of Elma, some distance west, near Grays Harbor, on the coast.  Patty recalls:

The next place was maybe a dairy farm where Dad was a farmer’s helper.  We had great times playing in the woods and even built small log cabins out of sapling trees with the farmer’s permission.    Life went on.

All I remember from here was playing in and around woods and fields, in the early spring.  I remember May Day and flowers and picking wild flowers for our mother, while out in the fields.  We played Indians or something like that, and used these great big ferns as our spears.  We would pull them out of the ground, strip off the leaves, and the shaft that remained made an excellent spear for throwing.  This is where I also recall something like unfinished lumber that we stacked to serve as a fort of sorts.  I also remember the Saturday bathing, in the unheated kitchen, which was the warmest room in the house by virtue of the wood-burning cook stove that was always there.  The tub was simply one of those big old round galvanized things (a tub, doh), placed in the middle of the floor.  Mom would periodically add hot water, from a bucket that was placed on the stove full of water for just this purpose, while the bathing ritual began.  And, yes, it was much like Patty described.  We didn’t stay in the Elma area longer than it took for the school year to end, then we moved from western Washington, to East/Central Washington (near Prosser), where we moved in with my mother’s sister and her husband, on their little farm (way too small for all of us, plus the three of them).  Here, our memories take divergent paths, as Patty remembers a reverse order:

After that was the move to the eastern side of the state where we lived on a ranch and had chickens and I witnessed slaughtering a cow for meat for the freezer.  We had a horse we could ride named Blackie and once he got scared by a rattlesnake and took off running with me on his back and no saddle…Ohhhh Boy!
After that job failed [for dad, that is; she’s being very considerate here, as we all know full well that the job did not fail, but Garland undoubtedly did] we did spend a summer with Aunt Dorothy and Uncle Claire on their small dairy farm.  My gosh, what they must have gone through having Mom and Dad and five kids there.  They were very kind.  I once went with them to a Grange Dance on a Saturday night and was highly impressed to see the social setting that they were involved in.  They had a high old time.  Note:  After reading part of what I had written here, Patty says that she believes the order of stops was indeed Prosser/Aunt & Uncle, first, Rattlesnakes/ranch, second.

*I don't remember the web site, but I found a place online where I could mark certain spots on a map that referred to the many, many places we lived while growing up.  That is the map I reference at this point.
Posted by jdocop at 12:58 PM