"That's all anybody calls me."

I was still twelve years old, when we suddenly moved from the small south central town of Goldendale, Washington, to Tacoma.  I did not know it at the time, but this was actually a return trip for me, since Tacoma is where I was born.  We had moved around a lot in my short life, as I recall that we had lived in about ten different houses by that point.  First, when I was born, the family lived in Tacoma, then we moved out southeast, to an area called Elk Plain, then a little cabin on a place called Rocky Ridge, then a couple of places in Eatonville, where I started school in the First Grade, about 1951.  We then moved to a Dairy farm near Elma, Washington, then across the mountains to the Prosser area.  We moved from Prosser to a wheat farm down near the Columbia River (Roosevelt, Washington), then, from about 1955 until June of 1959, we lived in Goldendale.
In the Spring of 1959, I finished the Seventh Grade, and acted as an usher at my brother, Dennis' Eighth Grade graduation.  My oldest brother, Mike, graduated from High School, right about the same time.  Immediately after his graduation ceremony, the entire family was rushed onto a Greyhound Bus bound for Tacoma.  I never knew why, but I'm sure it had to do with my father having worn out his welcome in that town, just as he'd done before, and he would do again.
At any rate, I recall waking up the next morning in a tiny upstairs bedroom at my grandfather's, a place unknown to me up to that time.  My grandfather's home was located at the corner of South 25th and Wilkerson, at the top of the long hill leading south, down to Center Street.  East on 25th Street, some 20 odd short blocks, down to Yakima Avenue, was the place that kept my brother, Dennis, and I occupied that first summer in Tacoma.
Located at 711 South 25th Street was the Tacoma Boys Club, open to all boys for a nominal membership fee (maybe a quarter?).  The Boys Club had an indoor swimming pool, way down in the basement, a gymnasium on the main floor, a small game room, with at least one pool table, a little front desk, separated from the main entry way by a glass partition, and a library upstairs, on the top floor.  The Director's office, with his secretary's desk, took up a large area on the main floor, down the short entry hall, on the right.
The club was reflective of a very strong Director, whose name was E. S. "Osty" Ostberg.  His personality dominated just about every aspect of what went on there, and wherever the Boys Club touched the lives of boys.  Osty lived upstairs on the top floor, with his dog, Butch, a Boxer that went everywhere with him.  I have searched the internet for any information about him, but only managed to find two mentions of him online.  One, from the University of Puget Sound's archives, was simply a photograph from 1952, some seven years before I even met the man.  That had to do with a group of local civic leaders who were gathered at a table (photo op*) while planning the annual Career Conference that was  sponsored by the Associated Women Students. 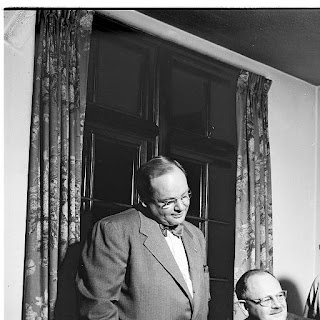 The only other mention I can find of Osty is from the Ames, Iowa, Daily Tribune, in February of 1973.  That article indicates that he retired from the Tacoma Boys Club in 1968, when he reached mandatory retirement age.  As best I can determine, he held that position from sometime in the 1940's, until he retired at 65, in 1968.  He did not take well to retired life, so asked the National Boys Club to find him something to do.  He then moved to Ames, Iowa, where he ran another Boys Club, even after losing a leg at some point.**
Osty drove a big Mercury Station Wagon (1957), and in my recollection was usually wearing a loose pair of slacks, as he bustled around the club, or the grounds of the Summer Camp.  He was a true godsend to many young lads in that time and place.  We only knew him as Osty (but I have to say that - in my mind - I always spelled it as Ostie).  He must have seen something in the two of us (my brother and I), because that first summer he offered us the chance to spend a week at the Boys Club's summer camp on Lake Tanwax, up near Kapowsin.  We spent a good part of our summer in and around that Boys Club, and we both ended up working there part time, after school, for a couple years after our arrival in Tacoma.
I can still picture Ostie now, with his rolling gait, rushing out of his office, in a hurry to get from one thing, to another.  I don't recall him wearing suits or ties, but rather, slacks, with perhaps a dress shirt.  His voice was kind of like Wilford Brimley's, without the down home accent, and with a lot more energy.  His secretary, whose name I have long forgotten, was sort of a cross between Mrs. Grundy (from the old "Archie" comics) and Eleanor Roosevelt.  Not skinny, like Mrs. Grundy, but with that kind of hair, always up in a bun, and sort of dowdy.  She was very efficient, and very nice, but I think she scared a lot of the kids.
I recall working at my first Boys Club job, down in the basement, behind a cage, handing out heavy metal baskets to members to put their clothes in while they were in the pool.  The process involved me giving them a basket, and then, they'd get a pin, or a token with which to later reclaim their basket.  I had to run the gym shorts/swim trunks we also issued to members through a commercial size dryer, periodically.  I also learned about how important it was to maintain the pool's Ph balance, and the lifeguard taught me how to do the daily checks of that chemical balance.
Later on, I worked upstairs at the front desk, where I issued passes to the gym, checked out the balls for the pool table, and learned to replace the tips on the cue sticks.  I also signed up new members, and basically did whatever Ostie and his secretary taught me to do.
We moved out of my grandfather's sometime during the first summer, so that by the time school started, I knew I'd be going to Jason Lee Junior High School, and we now lived a good distance from the Boys Club.  Since this distance was around two miles, on city streets, at some point, Ostie gave me a bike.  I think this was partly the result of me snooping around the place until I knew a lot of secrets, and that there was a lot of old stuff just laying around on the grounds of the Boys Club.  I likely mentioned to Ostie that I had found this old bike, and he gave it to me so that I wouldn't have to walk so far to and from work.  I took it home, cleaned it up, and put it into use for my commute.  This was a deluxe old Schwinn, with a spring over the front wheel.  I recall that I simply removed the front fender, because the original was so bent out of shape, bought inner tubes for the tires, and also removed the metal decoration that went in the middle of things.  That old thing served me very well for a few years until someone stole it.
I'm sorry that I never bothered to go back at any time in my life to say thanks to Ostie, and I'm sorry to think that perhaps he never knew what an important influence he had on my life.  I am also a bit sad that he never seemed to receive the recognition that he surely deserved from the community at large.  I hope that he did at least end his days happily, and I hate the thought that he may well have ended it alone, since he had no family that we ever knew of.  Sometimes we need to stop and think about the Ostie's of this world, and maybe that's a part of what is missing from today's America - an appreciation for those who came before us, who set good examples for us, and who set us on our paths to adult life.