I've been reminiscing lately about not just old songs, but old recordings.  I have to say old because I am now in my seventies, and the music of my youth is certainly considered to be just that.  My earliest recollections having to do with music would be listening to radio, and hearing songs performed live by artists like Bing Crosby, or Doris Day, and other musicians of that era.  It wasn't until the late 50's that I can recall hearing the incursion of Rock and Roll, via records played on the radio, in what became the Top Forty broadcasts of various local radio stations.  By the time I was in Junior High (1959-60), we were listening to "our" music on stations mostly out of Seattle, like KJR and KOL.  I do recall hearing some limited rock and roll on KTNT (I think it was), in Tacoma.  As for listening to records, I do remember we had a copy of Rockin' Robin Roberts' version of "Louie Louie" (Etiquette Label, which was the Wailers' own label, and they were the band on that record, with him as their lead singer) that I just about wore out. 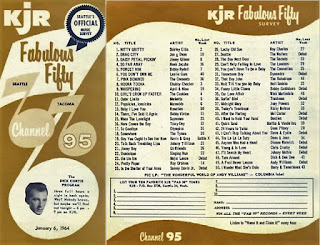 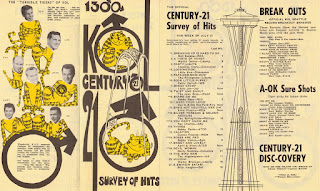 I got into amassing a serious record collection when I was a Junior in High School.  I had started buying 45's (two sided vinyl recordings whose name had to do with the speed at which they were played, 45 revolutions per minute), and then moved on to trading them with friends.  This would have been back in the very early 1960's, when 45's sold for 98 cents, and LPs (Long Playing record albums, played at 33⅓ rpm) sold for about $3.98 (2.98?).  I can still visualize so many different record labels every time I hear certain oldies played.  That was how I remember so many records - by their label, as much as by the artist.  Some singles were especially prized, so we often found ourselves offering one important one for three or four - or more - others, not so important.
Of course the major record labels were RCA Victor ("His Master's Voice" featured in their ubiquitous logo), Columbia, Capitol, Decca, Atlantic, and a few others. 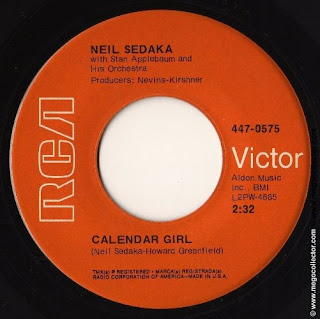 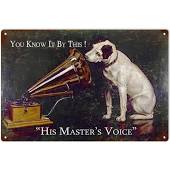 This RCA Victor logo was featured on many of those records

I think the most common record player for kids like me was the one made by RCA, that only played 45's, and allowed us to stack several records on the spindle, and then played them in sequence. 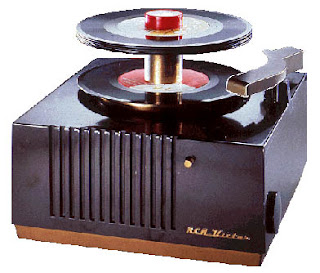 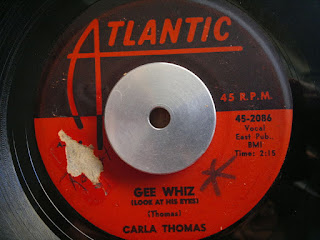 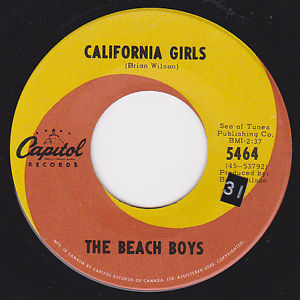 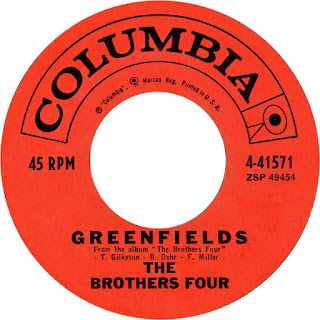 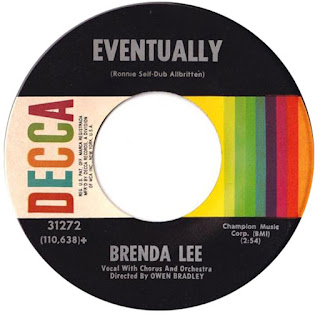 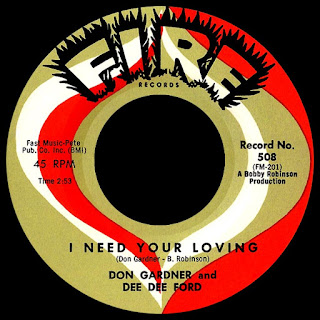 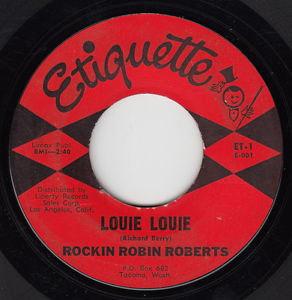 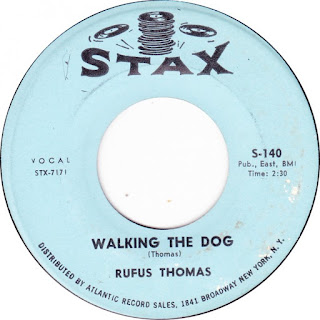 Just a representative few of the many labels found on records of the day.

Within each of these major labels, there were many variations on some logo's use on different recordings.  Different colors were sometimes used on different recordings on the same label, and I think labels often used variations in color and design for different markets, especially overseas.  And, of course, there were many other record labels, beyond the ones I have mentioned, but I think most were affiliated with one of the bigger names in order to gain wider distribution.  That might explain why some major recording artists seemed to go from one label to another, especially early in their careers.  As for labels, Motown was not really known yet, but Berry Gordy had begun Tamla Records in 1959, and some early Motown artists were being released on Gordy Records.
While the bright and varied labels may have had some small part in the records we sought, the real reason was indeed - and always - the music.  We were very much aware of and listening to a lot of stuff you no longer hear these days.  The Brothers Four, The Kingston Trio, The Limeliters, The Chad Mitchell Trio, Peter, Paul, and Mary, and The New Christy Minstrels were some very big names for a time.  Of course, by this time Bob Dylan was certainly writing songs that were quickly covered by other artists, and Joan Baez was also recording, writing and singing some as well.
My early record players were purchased at a Goodwill Store that was located, I believe, right about the corner of South Yakima and South 25th Street, in Tacoma.  I would buy very old radio/record player combinations, with beautiful wooden cabinets for only a couple of bucks.  I remember buying more than one because usually some part or another would not work properly.  The record changers would fail, or the turntable wouldn't move at all.  I would also buy more than one just to get more speakers to hang in the basement.  Eventually, however, I had a system working, and I strung wires all over that basement so that my sound was extended.
I graduated from Stadium High School on June 1, 1964, and we moved from Tacoma to Enumclaw, Washington, the very next day.  For those who don't know what the world was like in those days, you should be aware that a new high school graduate had absolutely no value anywhere in the scheme of things, beyond ready cannon fodder for the war machine that existed at that time (yes, we were just ramping up in Vietnam).  I was pretty ignorant of the world, admittedly, and had no clue about what my real options might have been.  I knew that I could not attend college, mostly because I did not know how to even look into such a thing.  (I was largely ignored by our so-called high school counselors because I had neither the grades or the social economic position to make me obvious college material.  I was not aware that others like me were going to Canada to avoid the pending Draft (it certainly never occurred to me that anyone would evade it).  I was convinced that my only option was to seek employment, but there I quickly learned that I was not at all employable.  On the one hand was the old catchall of "You have no experience!", and on the other was, "I can't risk hiring you because you'll be snatched up in the Draft any day now."
Finally, after looking for work all of that summer of 1964, I was able to land a place in a program that was just getting started under the "Manpower Development and Training Act of 1964," which was designed to train mostly young people to work in areas where there might be a need.  I later learned that the National Job Corps grew out of this, but that's another story.  The program that I entered that fall involved training at Rainier State School in nearby Buckley, Washington, as a Ward Attendant.  I guess that would be something akin to a Nurse Assistant today.  At any rate, I did complete this training through the winter of 1964, into the spring of 1965, only to learn that there were no jobs available.  I think one person out of the group with which I trained was actually offered a job.
(One other memory stands out for me, from my time in Enumclaw.  I remember purchasing a double record set featuring Peter, Paul, and Mary, on the Columbia Record Label.  This was titled "In Concert," and was recorded at various locations, mostly in California. 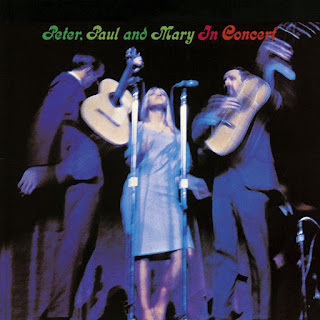 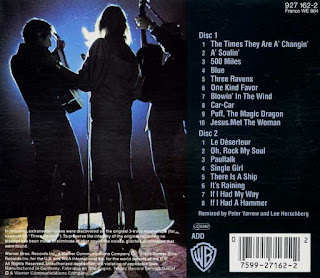 Two Disc Vinyl That I Once Owned.

I bought it at a very special place that was likely called Incorporated Sales, but the name changed to Jayhawks around 1965.  That store, in that little town, had everything you could ask for, at very fair prices.  I believe that Walmart finally forced them out of business, and that's a shame.  Oh, well.  Back to training and job hunting):
This was just as well, as we then moved all the way across the mountains to Moses Lake, Washington, from which location my father traveled to the small town of Othello for work as a bookkeeper.  I did manage to get hired on there for that summer, driving a forklift in a frozen food processing plant.  I worked through the end of the pea harvest, into the beginning of the corn harvest, until my position was taken over by the boss' nephew, and I was relegated to sweeping up whatever fell off the processing line.  I abruptly quit, and moved to Seattle, where I moved in with my oldest brother and his wife.


Throughout this time I continued to purchase records, and gradually, my collection had increased until I had amassed over three hundred 45's and over one hundred LP's.  When I got my Draft Notice in October of 1965, unfortunately I decided to leave all of my records with a girl I had known for some time, and I never saw her, or the records, again.
Posted by jdocop at 1:08 PM