As you read this, and look at the pretty pictures, I wish I could share with you a song, plus monologue from an old LP I once owned.  I still have the music, only it is now digital, of course.  The LP was "Peter, Paul, and Mary - In Concert," and it was recorded way back in 1964, in several locations, and very much live.  The track that I would like you to hear is called "Car, Car," and it begins with Mary Travers voice dominating, as they ask you to "Take me for a ride in your car, car.  Take me for a ride..."  Very quickly, this leads to various plays on words, and segues nicely into a Peter Yarrow monologue.  Here's a link to an audio version:  https://www.youtube.com/watch?v=8RtaCYzk5VQ

Sometimes, I wonder how we have gone from having so many different American car manufacturers back in the 50's, to so few today.  I have trouble reconciling something that was preached to my generation, with the reality of what it has come to mean.  We were taught that competition was the lifeblood of American business, and of just about every other aspect of American life.  And, competition was indeed fierce between manufacturers of automobiles.  The first big year of production following WWII was 1947, when there were some 19 brands of car to choose from. 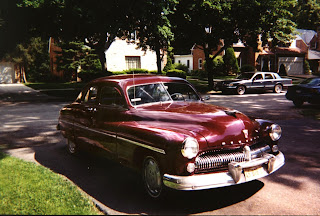 This is my personal all time favorite car, a 1949 Mercury 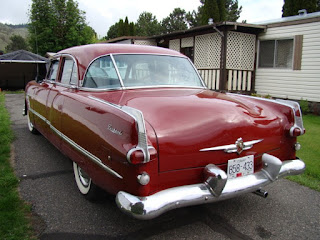 The 1958 Chevrolet Impala; the only year of that decade when Ford outsold Chevy

Today, of the American brand names, there are only the GM line (Cadillac, Chevrolet, Buick, and GMC trucks), Ford (Ford cars, Lincoln, and Ford trucks), and Chrysler (Chrysler, Jeep, Dodge, and Dodge trucks) (which really isn't Chrysler any more, since it is owned by Fiat, an Italian company).  We could also mention Tesla, which is the first new name in a long, long time.  Also, to be fair, I might mention that GM used to mean Pontiac, Oldsmobile, and, for a few brief years, even Saturn.  And, Ford also manufactured Mercury, more models of Lincolns, and even Edsel.  And, of course, back in the day, Chrysler also made Desoto and Plymouth cars.

Why so many to choose from in years past, when our population was so much smaller, and now, so few, when there are so many more people?!  I know the answer, and it is not the result of the years of competition so much as it is plain and simple greed.  Companies and corporations are never satisfied with simply making a profit, keeping up with maintenance and normal growth.  Now, after all these years of "competition,"  the mind set has become all about Growth and more and more and more profit.

I do have trouble understanding why greed has taken over so many people.  I simply do not recall such an atmosphere surrounding American business when I was growing up in the 1950's and 60's.  One of the most hated figures in the world was mean Mr. Potter, from the classic, "It's A Wonderful Life," from 1946.  Why?  Because he was depicted as greedy, mean, and terminally Scrooge-like.  So, how did we get from that, to the despicable, greedy, heartless, and ignorant thing currently in the White House?!  OK.  OK.  I'm getting a bit off topic (not to mention political) here.  Sorry.

I do not know if it was just the greed that has led us to where we are today, but something else I cannot explain, is that all the new cars today look alike.  I grew up looking forward each year to the new models, as they came out in the fall.  Somehow, I came to believe that competition was driving that re-design from year to year.  And, more important, each brand name had its own distinct look.  Sometimes, sound, as well.  We could tell at a glance what kind of car we were seeing come down the road, and often we could tell the difference between a Ford V8 and a Chevy.

Granted, the car market today is dominated by foreign names (Toyota, Nissan, Kia, Hyundai, Mercedes Benz, Audi, Volkswagen, and others), and maybe that has to do with competition, but consider this.  All of those really great names of the past that were driven out of business, for whatever reasons, had to have left a void that these foreign brands have filled.  And, now that the void has been filled, maybe nobody in the industry feels any need to turn out uniquely designed automobiles.

Personally, I feel that the current manufacturers have no interest in new designs, or even in making their cars look good.  I think today it is all about technology, and that is why there are no automobile mechanics any more.  These days, when your car breaks down, you need a technician who can diagnose, and then repair your car.  And, of course, the problems today are not minor, since the technology used requires that entire systems of the vehicle now need to be replaced, even when the problem is a tiny part within a given system.

I just do not know.  Personally, I still love the cars of long ago, and maybe that has as much to do with getting old, as it has to do with anything else.

A look at brands then:

In the years that followed the Second World War, mostly through the 1950's, these brands were introduced: