Married Life After the Army

Part VIII……..out of the Army, and the newlyweds arrived in Seattle…….
We bought our first home on North 36th Street, in what was known as the Fremont area, in early 1969.  Here is what that house looks like as of June, 2016: 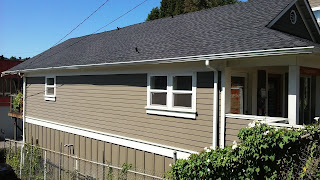 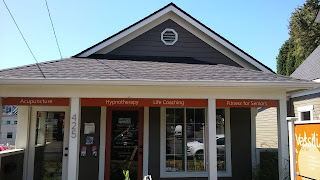 And, here is what it looked like in 1937, according to the Fremont Historical Society: 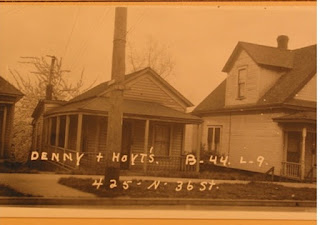 I have no idea who Denny + Hoyt’s refers to, but I did see that caption on some other photos located on the web site for the Fremont Area Historical Organization.  I suspect it may have been the names of the people who lived there at that time.

And, this is the only photo of it from our time there.  That is Blanca standing on the little porch: 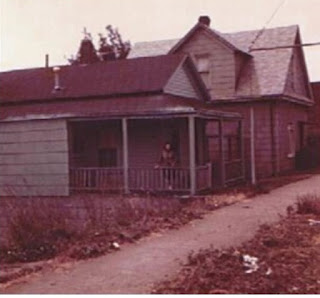 After a short 14 months or so in Seattle, we decided – literally overnight – to move to El Paso, mostly because Blanca’s parents arrived mysteriously for a visit, the very day after I had gotten fed up and quit my job at Boeing.  It just seemed somehow convenient to have their assistance with loading our things into a U-Haul, and to make the drive back down to Texas.  (Yes, there is another story here, but I think I’ll save it for the novel).

El Paso was a struggle at first, but we did manage to find work, and even were able to buy a house within about three months of our arrival.  The struggle continued from 1970, until a friend prevailed upon me to finally use my head for something besides a hat rack (“Use the GI Bill, fool, before it’s too late!” he said).  We already had two children when I started college, and by the time Blanca finished her university, we had four.  We spent many years on the brink of disaster, living from paycheck to paycheck, never seeming to get ahead.

All of the above having been said, I am reminded that this was supposed to be a more positive piece, uplifting, as it were, as compared to what I usually write.  So, to get back on track, let’s focus on some of those more positive things.  Eventually, as the kids grew up, our careers advanced, and we not only made plans for our eventual retirement, and (despite some adjustments along the way) we ultimately reached a point where we felt we could end our working lives, and begin our new life in Costa Rica.

This is not to say that our lives begin and end there in what we thought was paradise, because we certainly have many fond memories of people and many other places.

We had many great times while living in El Paso’s lower valley (8153 Valley View) where all the kids were born, and launched on their educational paths.  We lived there for some sixteen years, and these are just a few of the highlights:  Arthur, the oldest, was born in 1971, started Head Start, and attended Pasodale Elementary, Ysleta Junior High, and Ysleta High School – we moved from this address in about 1986, when he was going into his junior or senior year of high school.  John, Jr., was born in 1973, and followed the same path, with the possible exception that he may have missed Ysleta Junior High (correct me if I’m wrong, John).  Both of them were able to graduate from Ysleta High School.  Blanca, Jr., our darling daughter, was born in 1977, and was able to graduate from Ysleta, but had to go a year or two to other schools (one year in the Socorro District, and another year of Junior High with her cousin, Melissa).  Andrew, the baby, was born in 1979, and started school in Ysleta, but switched to Socorro District when we moved to the edge of El Paso, very close to Socorro, in 1986.  He did attend Ysleta High School, like his siblings, but graduated from Hanks High School.

We moved from the Ysleta area, to the very edge of the city of El Paso, almost to the town of Socorro (we found ourselves located about three houses from the city limits, on Moses Drive) in 1986.  We had decided it was time to move when our home was burglarized while on one of many trips to Mexico (Chihuahua) over Easter Weekend in, I believe 1986.  This new neighborhood was a very different kind of neighborhood, with the homes on our block being owner occupied, mostly owner-built, but we were surrounded by lower class developments, and two street gangs (Los Ortiz Bros and La F Troop).  This was a fantastic home, with some 2400 sq. ft., four bedrooms, two and a half bathrooms, a living room, a den, and a room that had been converted from what was originally intended to be a garage, into a play room, and a huge yard.  We had a pool table there, with a wet bar and a beer fridge (that actually stayed with me from Valley View, up until we moved to Dallas many years later; here’s another side story.  I bought it used from Bertha, Blanca’s sister.  It started life as one of those milk dispenser fridges you see on the back counter at a diner, like Denny’s.  It is still working today, reclaimed from the garage at Bucko’s house in Austin.  I foolishly gave it to him while we were in Dallas because I bought a new, slightly bigger fridge that I then sold before we moved here.  I recently blogged about restoring this old friend:  see my entry of Saturday, May 13, 2017, "American Restoration, El Chuco Style."

The time spent there (on Moses) was, overall, very good to us, but it was marked by a frequent sound of actual gunshots, followed by the sirens of the police and ambulances, and accompanied by the police helicopter, with high intensity searchlight sweeping the night sky looking for whatever gang members were responsible for the latest violence.
Oddly enough, we only had one incident while living here, where a thief from Mexico came into our yard, took clothes off the clotheslines, and stole a stereo from my brother-in-law’s motor home that had been parked in our driveway.  What made this even more odd was that Blanca happened to get up early that morning (a Sunday, I think), and had gone into the yard, maybe to bring in the clothes, and encountered the thief, carrying a bag and some sort of implement in his hands (maybe bolt cutters).  They were both so startled that neither reacted in a manner one might expect.  Blanca told the guy, in Spanish, that he was on private property, and walked him out the front gate, and he left.  Then, we discovered that some things were missing.  The clothes were found on the ground near the back fence, as if he had moved them there to pick up later.  The gap in the dashboard of the motor home (where the stereo used to be) was not noticed until sometime later.