Some six months after I had earned my license as a Registered Nurse, I went to work for the El Paso City/County Health Department in September of 1977.  My first assignment was to the Ysleta Health Center, located at 9060 Socorro Road, across the street from an old cotton gin.  Just next door used to be (I think) a Boys' Club, with an outside swimming pool, that was filled in a long, long time ago.  My boss, the Charge Nurse at the clinic, was Mrs. Christine Barron, RN, who was a long time Ysleta resident.

This was one of several buildings put up all over the county at roughly the same time, either during the 60's or the early 70's.  I recall the same essential building in Tigua, Northeast, San Juan (on Trowbridge), Buena Vista (not too far from ASARCO's smelter), Moon City (on North Loop), and Canutillo: 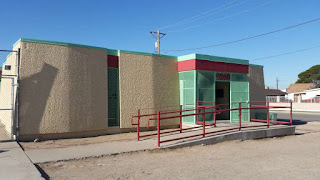 The clinic building still looks much the same, all these years later.  I do not believe that the cage at the entrance existed way back then, and the handicapped access ramp was added in the 1980's.

I am sorry that I no longer remember Mrs. Barron's maiden name, but I do recall that she talked about growing up in the Ysleta area, and spending time on both sides of the border, as her father had a ranch just across in the Zaragoza area.  She was a widow, with two grown children, both of whom had gone on to live their own lives.  I believe her daughter was already in Austin, and her son was married and starting his own family.

She, like most of the older female RN's and LVN's I worked with way back then, took me under her wing, and tried to teach me the important aspects of Public Health Nursing.  In the late 1970's almost all of the Public Health Nurses in El Paso were graduates of one of the finest Nursing Schools in Texas, The Hotêl Dieu School of Nursing.  Hotêl Dieu was a Catholic Hospital, located down on Stanton Street, between Arizona and Rio Grande.  Across the street, at the end of the block on Arizona, was the School of Nursing, which later was taken over by UTEP's Nursing School.  Believe me when I tell you, the graduates of that old Diploma school were far superior to anything that has come out of UTEP.

Mrs. Barron was amazing, and set a standard so high that I was really worried that I could never reach it.  One of the most important services that we delivered in those days was the administration of routine childhood immunizations to all children in El Paso.  In Ysleta, we did pre-school kids on Tuesdays, and School aged kids on Friday afternoons.  She could provide immunizations to many more than I could, perhaps 4-5 times as many.  It did take me months to get up to her speed.

Back in those days, a very important part of what we did in Public Health was provide educational talks to our 'captive' audiences of parents and grandparents, just before we started calling out the names of those who were to be immunized.  I did not speak much Spanish at that time, and our audience was always very heavily weighted towards no English at all.  Mrs. Barron pushed me very hard to improve my Spanish enough so that I could deliver my share of these talks.  The easy part was that no script was followed, but something short and sweet needed to be delivered in each talk.  We might talk about mosquito control, or household hygiene, and we always provided information about how to care for the children in the hours and days following their shots.

So, while I got an education into Public Health, my Spanish was being improved.  I worked with Mrs. Barron for some years, and learned a lot more than Spanish from her.  She taught me a lot of the Ysleta area history, and about what it was like for her growing up in El Paso's Lower Valley.  She reminisced, at times, about her family, and told how her father owned a ranch on the Mexican side of the border when she was a girl, and her family used to cross back and forth all the time.  I learned about some of the families that had lived in that part of the county for many generations, and some, whose names are known today.

And, then, after some years, she reached the point where she basically tested me by telling me a joke, in Spanish, that she tied into the Ysleta area, and when I realized that I could understand her joke, I knew that I had at last arrived.

There used to be a general medical clinic in Ysleta called the Johnstone Clinic.  Dr. Johnstone was very well known in El Paso, after establishing his practice here in the years following WWII. His clinic was where generations of Ysleta area residents went for health care for the entire family.  At one point in time, there was a lady named Juana, from Mexico originally, who had moved to the Ysleta area, and began taking her family to Dr. Johnstone.  Over time she wrote letters home to her Comadre, (literally, co-mother) urging that she bring her ahijado (Godson) to live in this area as well.  "Comadre," she wrote, "Come live here.  You'll really like it, and we have this really great doctor, who I just know will be able to help mijo (my son)."

Well, finally, the Comadre was able to relocate (quite legally, I assure you) to the U. S. A., and she settled in the Ysleta area.  Now, it was up to Juana to arrange for her godson to be seen by the great Dr. Johnstone, so she made an appointment, and the two Comadres took little Chuy (nickname for Jesus) to the clinic with great anticipation.

When the staff called the little boy's name, both mother and godmother eagerly entered the exam room to see what could be done for little Chuy.  The staff member told them to put the little boy on the exam table, and to take off his little shirt and his pants, and they covered him with a sheet, for his examination.

Finally, when they felt like they could take it no more, the great doctor entered the room, in a rush. "Good Morning, ladies," he said.  "What can we do for (looking mostly at the chart) Jesus today?"

Juana explained to the doctor that she was concerned that maybe her godson had a problem, and she just knew that he could fix it right up.

Juana then had to explain to her inquiring Comadre what the doctor had said ("vamos aver"), as he began his examination of the little boy.

He did all the usual things, listening to the chest, feeling up and down the arms and legs, and so on.  He asked some of the usual questions, as well, for which the caring Godmother, Juana, translated as best she could, but rarely well, you understand.

At length, he turned to the women, and said, "Well, it is pretty obvious.  This little boy is mentally retarded."