The day before yesterday, I had to cross the border into Cd. Juarez, to see my dentist.  Crossing back into El Paso, via the Downtown Bridge, we were pleasantly surprised to encounter a decent human being working as a CBP Agent.  Unfortunately, I did not get his name.  However, after determining that we had nothing to declare, and assuring himself that we were not terrorists, he asked how long our wait had been, and he encouraged us to get the passport card that allows a quicker inspection upon entering the U. S.

It is my understanding that the City of El Paso has entered into some sort of agreement with CBP to strive to have more lanes open at local border crossings.  We, the taxpayers of El Paso, are paying the federal government money to hire more agents, supposedly.  I do not recall the specifics of this agreement, but I have to say that I do not think the federal government is holding up its end of the bargain.  Here is a link to a news report that announced a renewal of this agreement, just last June:

Unfortunately, the report does not provide any specifics as to who is to do what, or how many additional agents are supposed to be available, so I can only speculate as to just how bad it would be to cross the border without these "additional" positions.  Yesterday, only eight of the twelve lanes were open, and half of those were dedicated to what the feds call "Fast Lane" traffic, the people who have undergone the additional expense of obtaining passport cards, evidently.

We noticed a similar situation last week when we went across via a different bridge to buy some planters (brightly painted clay pots).  Only about half of the lanes at the Ysleta Bridge were open on that occasion.

Needless to say, the fewer lanes open, the longer the lines, and the longer the time spent in line.  For those not familiar with our border, let me remind you that this is Holy Week, and that means that many Mexican citizens are on vacation, so traditionally more people are trying to enter the U. S. at this time.  The line for the downtown bridge yesterday was the longest I can remember seeing there for a good long while.

Meanwhile, while lining up, way back on Avenida Juarez, we had plenty of time to cogitate on some of the changes along that once busy street.  For one thing, it used to be very busy, because it was a tourist magnet.  Bars and shops and restaurants used to line the street, along with a couple of pharmacies, at least one OTB/bar/restaurant, and various hawkers.  Now, most of the buildings are shuttered, and the only pedestrian traffic is local.  Not one tourist visible, in other words.  The signage on the store fronts was obviously changed some years ago, in an effort to make it all look the same, perhaps in an effort to modernize, but those signs, identifying mostly dead and gone businesses, are showing their age. 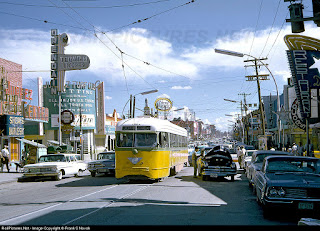 This above photo is what Avenida Juarez looked like many years ago, around 1963.  Note the trolley, which passed from the scene way back in the 70's.  That trolley used to go from El Paso, across the international border into Cd. Juarez, and it carried many tourists and shoppers for many years.  Today, that street is hardly recognizable. 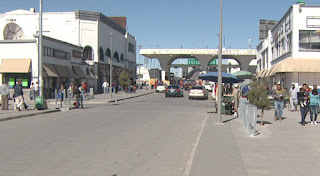 This view is taken from very close to the end of the street, just at the toll booths on the Mexican side of the border, looking north.  This is a much more recent view, but at least two years old.  Yesterday, there was solid traffic from way behind (four or five blocks) this camera location, all the way across the bridge, where there were four lanes going into El Paso. 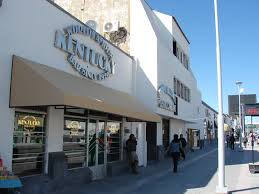 Close to the toll booths on the Mexican side, still exists the Kentucky Club, a long time Juarez landmark.  This is a very special place, and I recall that it was one of the very few places in Juarez where I could get draft beer.  They had a large trough up on the bar, full of ice, and they kept these very heavy, thick mugs in the ice so that your fresh poured brew would be super cold.  Now, they even have some tables outside, near where you see the person standing in this photo.  I suppose the inside is all modernized, as well.

We were saddened to think of the life this once busy street once saw.  It was busy yesterday, but that was because of the vehicular traffic lined up to cross into El Paso. I did not notice much business taking place at any of the few places that remain open. I know that this is likely a very blasphemous thought, but I have long since come to the conclusion that not all change is necessarily good.
Posted by jdocop at 2:20 PM