Pie In The Sky

Therefore, one may well ask, "Why are we always struggling to do things like those much larger cities?"  Particularly strange has been our recent destruction of a still usable City Hall in order to build a minor league baseball park, and the complete tear down of a once iconic, if not unique central plaza to be replaced by a "modern" and rather barren tiny square.  We also have been subjected to the introduction of a very expensive, but not easily accessible Top Golf facility, and something called iFly which, while still under construction, burned.  There is a planned Great Wolf Lodge that will also cost local tax payers a great deal of money.  There is continuous discussion about attracting new business to town, in order to create new jobs, but this is without ever addressing the reality of why new business, such as manufacturing, might not want to move to this isolated corner of far west Texas.

As some of you may know, El Paso has recently launched a Trolley system that runs a total of 4.8 miles.  Below is a map showing our already existing bus routes, which consistently carry buses that are always way under capacity.  As a matter of fact, according to City reports, our taxpayer funded public transit system loses more riders each year. 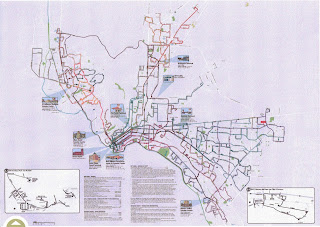 As you can see, the buses do cover a lot of the city.  However, the tiny little troller pretty much runs from nowhere to nowhere.  The route is obviously located in an area where comparatively few people actually live or work.  And, it is too short to be of any practical use for transportation, even if lots of people lived and worked along that route.
Trolley Route 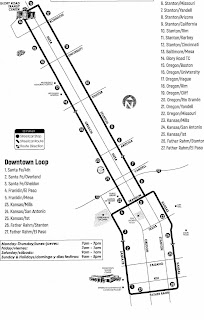 However, once upon a time we did have a practical trolley system that covered a larger part of El Paso, and even crossed the border to run through a good part of Cd. Juarez, our former sister city.  Below is a photo of the interior of one of those trolleys (today's version features some of the same cars, renovated at great cost) when it was stopped at the international border crossing.  The man in uniform was a U. S. Customs agent checking for status.  It might be of interest to note that we rarely had to show any ID when crossing the border.  All we had to do was declare our citizenship.  Obviously, if one was a noncitizen, then one would be expected to have a border crossing card. 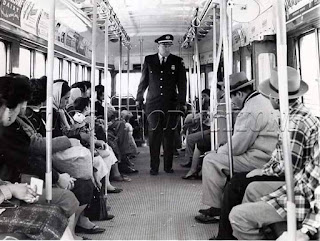 Nestor Valencia, a well known local artist who is behind many of the portraits you may have seen around the city, was also one of the planners for the Cordova Bridge -- Chamizal Park -- was also involved in helping to restore the Plaza Theatre and most recently helped plan the new San Jacinto Plaza:
"In 1920 through 1925 we had 52 miles of trolley system in El Paso. We were a street car system," Valencia said.  Valencia told ABC-7 that in 1922, the street car was moving 2.1 million passengers a year.
photos collected from around 1960, showing trolleys on both sides of the border can be seen here:
https://www.youtube.com/watch?v=K0i5kqn9Efw
So, we are left with a number of questions:  Why did we just build this new trolley system, if we lack any real tourist attractions, don't need it for daily transportation, and cannot reasonably expect it, all by itself, to be a tourist attraction?  Why do we continue to subsidize a public transportation system that consistently loses money, while not really providing necessary transportation?  Why do we allow our elected representatives to neglect our streets at the expense of building unnecessary facilities and waste money fighting for things we don't need or want?
Posted by jdocop at 3:27 PM