Joe Btfsplk was a real person.

"Let's go see if there are any more crawdads," said Peggy, my older sister.

"Nah, I wanna go riding down the hill," I said.

"Well," she said, "Let's go by the creek first, and then, if Mick and Doug want to, we'll go up the hill with the wagon."

I agreed with this, and off to the creek we went.  Well, it wasn't really a creek.  More like a brook; just a tiny rivulet that ran along one side of the property where the little cabin was located.

We called the place Rocky Ridge, and that most likely had to do with the fact that the little cabin where we lived was pushed back against the ridge that ran at the back of the property.  My memory is that the property was entered from the north or northwest corner, and there was an east/west road in that direction.  The small creek ran from northwest, to southwest, along one edge of the property, and  there were trees between the western edge and whatever was out that way.

The rest of the northern edge, all of the eastern edge, and the southern were trees, growing along a ridge that climbed upward from the level of the cabin.

We lived in this cabin for part of one year, moving there after our home had burned to the ground sometime in mid-1951.

Mom was pregnant that summer, and Mick took his position as oldest very seriously.  This slim, dark haired ten year old did indeed carry a lot of responsibility for his age, and those of us younger than he did not exactly go out of our way to make things any easier for him.

He was pretty much in charge of us most days, and usually it was all four of us that played together, under his supervision.  We went to the creek, and we waded in its crystal clear, shallow water.  We counted crawdads, picked them up, moved them around, and if we got thirsty, never thought twice about drinking from our cupped hands.

Then, just about the best thing to do, we went for the wagon, and began to pull it up the hill, on the old road that ran along the top of the ridge, behind the cabin.  Most folks should be  aware of the famous Radio Flyer Red Wagons of the 50's.  It might, therefore, interest you to know that the Radio Flyers were not the best wagons around.  They were not the best made, in terms of quality, nor were they as practical as they could have been.  And, more important, they were not as fast as they could have been for coasting down a hill.  We had a red wagon that was either a Mercury or a Murray brand and it beat the pants off any old boxy Radio Flyer you ever saw.

The four of us pretty much shared our streamlined wagon.  Mick, the oldest, was about 10 years old, then Peggyy was about 8, Doug must have been 6 and a half, and I was 5.  The wagon that we had was, in my recollection, a red metallic color, but that was a long time ago, and I can't find any other image than just plain red.  It looked like the image below. 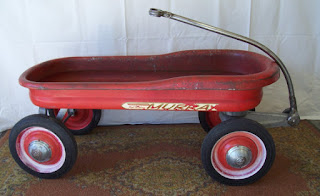 We used it for play, but it was also a work horse, and it carried wood for the stove, dirt, and whatever we needed to move from one place to another.

On the day in question, however, our purpose was play.  The idea was to pull it up to the top of the hill, around the long curve, up above the cabin.  There was an old road up there, with pretty good pavement, and it was great fun to pile into the wagon, and get a push off from one of my older siblings, and then go like a bat out of hell, until we ran out of hill, or road, way down, around the curve, at the bottom.

As we made our way up the hill, we passed a neighbor's property, where we tread with care, because they had a dog that always went nuts at sight of us.  For some reason, this particular day, it got loose, and attacked poor Dougie.  Who knows why he got singled out; maybe it was because his level of fear was greater than the rest of us.  Maybe it was because everything always seemed to happen to Doug.  I don't know.

My recollection is not the best, but I remember a flurry of activity.  Dog and kids, in a scramble, raising a lot of dust.  I remember a cacophony of noise, with the growling of the dog, the screams and yelling of Dougie and the rest of us.  Fortunately, the lady who owned the dog heard us and came to pull him off poor Doug.

The dog had bitten through his cheek, up on the right side, just below his eye.  There were two long gashes, and I could see the white line of his skin contrasted with the red flesh underneath.  There was, of course, a lot of blood.  There was another puncture clear through his lower lip, and various other cuts and scrapes and bruises.

I don't know how we got him back home, because I just do not remember.  He was taken to the hospital, where he spent at least one night, after they stitched him up.  He carried the scars the rest of his life.  His upper right cheek, especially as a child, looked like a double railroad track.  The physical scars faded over the years, but I know that the psychological scars never did heal.  And, now, he's gone too, faded away just like those scars.
Posted by jdocop at 10:52 AM