Cacophony in the Jungle.


Late last year, we noticed a poster on the wall at our favorite restaurant, Las Orquideas, announcing an upcoming appearance by La Sonora Dinamita*, a world famous group from Columbia, to be in a nearby village called Pejibaye. The date for this event just happened to be Blanca's birthday, so naturally, we had to go. The cost was very reasonable, so I gave money to Don Alfonso, and we arranged that he would get us tickets, and then, the night of the dance/show/appearance, we drove up to Cabanga. At the restaurant, we shared a quick beer, and met a couple of ladies, neighbors and friends of theirs, who were also going, and then we drove the three kilometers to Pejibaye. This was, to put it mildly, an experience. The road was just as bad as the road up to Cabanga (oh, I never told you that, even though the distance from us to Cabanga is only 8-9 kms, the time to travel that distance is at least 45 minutes – it used to be longer before they fixed the road!), so it was not really a short trip.

We arrived at the Pejibaye community center, as the 'warm-up' group was performing. This place, as are most public gathering places in our part of the country, was very rustic in appearance. The tables and stools were the crudest of hand-made rough-cut wooden furniture. The floor was polished cement. At one end, an area had been taken over for a sort of stage, and was occupied by the opening act, whose name I never learned. They were dwarfed by several giant speakers, on both sides of their 'stage' area. There was monstrously large sound mixer set up, with a myriad jumble of cables taped to the floor, from the stage area, along one edge of the dance area, to where what would usually be a sound engineer could control the mixer. Unfortunately, I don't think their 'sound engineer' had any concept of proper sound mixing, and I suspect his hearing is as bad as mine.

I really don't know how to describe this sound experience. I mean, it appeared to be a sound system to inspire any serious musician in 1980, or so (actually, it was a decent looking setup), but whoever paid for it evidently didn't think that it was necessary to put out any additional expense and actually train someone to run it. But, being the trusting sole that I am, I figured that maybe the opening act's sound was so bad because they were just the opening act. I mean, all I heard was bass and drums, lots of bass, with a lot of rhythm from the drums (not just a drum kit, but Congas, and stuff. Meanwhile, I could see some guys up there, singing into microphones, and, there were some other instruments, connected to amplifiers, but I couldn't hear any of them over that driving rhythm.

Actually, I have to give full credit to my having remembered to take along some old ear plugs to the fact that I can still hear the keys on my keyboard clicking as I write this. I do believe I could easily have gone deaf from the sheer volume of that sound system. As I said, though, I expected the overall quality of the sound to improve when the main act was introduced, since this is, after all, a long established professional act.

We did try dancing a couple of times, but I suggested we wait for the main act, and so we sat and watched the crowd grow for a bit. Then, I am saddened to report that, with the introduction of the main act, the sound did not improve at all. You should know that the group featured horns, guitars, two girl singers, and in total had to equal, what, six or eight persons? 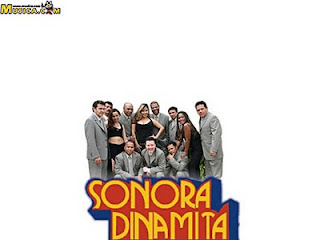 – Actually, according to the photo you can see here, there should have been twelve of them - But, all I could hear, just as with the opening act, was drums and bass. I know there were people singing, 'cause I could see their lips moving, and their body language indicated that they were – at times – singing their hearts out. But, I never could tell what they were singing. Nor could I hear those horns, or the guitar, even though all indications were that the musicians were playing those instruments.

By the time La Sonora Dinamita got started, there was a surprisingly good-sized crowd present, and the tables were pretty much filled, while the bar was pushing out the suds (mostly Imperial, with some Pilsen) and gaseosas. And, the tables rapidly became depositories for purses and other personal belongings, as everybody hit the dance floor. And, man oh man, do those Ticos shine on the dance floor! I suppose most gringos might think of the Cumbia style of dancing as being like the Meringue, but I'm not really sure. All I know is that every song was so fast as to be almost frenetic, and every couple knew the same style of dancing. And, you should know that, even though the Spanish word for dance is baila (from the verb, a bailar, or, 'to dance'), and that sounds a lot like ballet to gringo ears, this is most definitely not, by any stretch of the imagination, a ballet. This is very serious, very complicated, very rapid movement to music that, to my ears at least, was mostly rhythm arising from the drums and bass.

It occurred to me while watching these really fine dancers, that while this involved a lot of very stylized (not to mention, very rapid) movement, it was very much directed by the Macho Latin males. This kind of dancing involves frequent spins, and intertwining of arms and limbs, with the male directing by, in some cases, literally slapping his partner on one shoulder area, or the other, to indicate the direction into which she was to spin. Other cases, it was much more subtle, and all you would see was a touch, from the male to the female, and that would direct her to turn one way or the other. Some couples were almost amusing to watch, as for instance, there was one short, squat man, dancing with a taller, thin girl. He still had the moves, though, and I was in awe of these people. I could have just watched them all night, if I could have put up with the sound. Again, we tried to dance a few times, but there is just no way I could hope to emulate the style of these people. I noticed that Don Alfonso and Yadira had the moves, but then, he is from Columbia, you know.

The floor was constantly full, and constantly moving. I could hardly tell one song from another, unfortunately, because of the, in my opinion, truly bad sound management. I normally like so-called salsa music, of which La Cumbia is but one example, but that is because I like the blending of horns, and guitars, and pianos, with voices, underscored by bass and drums, with the bass and drums driving the music, but from the background, as it were. This just did not suit my tastes, and it wasn't long before I started lobbying for an early departure.

I did feel bad about asking Don Alfonso and Yadira to leave so early, but I really couldn't see staying there any longer. I grant you that watching the Ticos dance can be fascinating, but I can only do that for so long, and then, it gets repetitious. So, it was best for us to leave, since we still had to drive back down the mountain, to get home.

Ultimately, I also have to wonder whether I might not just be getting a bit long in the tooth for events of this nature. What younger people cannot relate to is that (and, I noticed this phenomenon in myself sometime in the mid-90's, when I was around 50 years old) one's hearing changes, as one ages. What I remember noticing at first was that, in a music venue, or a sports bar setting, I couldn't hear conversation over the background noise, and I began to avoid such situations entirely. I am always a bit put off (I really don't know what term to put to this feeling; I guess I find it disappointing that the filmmaker thinks so little of his audience that he thinks this sort of scene looks real; I just don't know) when watching a movie or TV show, and they show a scene like a bar, a restaurant, an airplane, and the actors are conversing in a normal voice, even whispering, sometimes. Anyone who has been in any of these locales knows this is not possible, and for me, it is worse than impossible – it can be downright uncomfortable!

Well, I ruminated on these, and other ideas as we wended our way homeward, in very thick fog, and rain, back up the mountain, and down again, to our little piece of paradise. I hope that I don't have to repeat this experience at any future time, as I am quite content to listen to my home stereo, or the music that is on my computer, at a level that doesn't break my eardrums, and with a sound mix that allows me to hear (as best as my diminishing sense of hearing allows me to) all the instruments and voices on the recordings.

*La Sonora Dinamita – A musical group, formed in Columbia, in 1960. Their music has always featured a style known as Cumbia, and the group has been disbanded and reformed more than once, over the years. The biggest hit they had was called "Mi Cucu," and that was reportedly (according to Wikipedia) a Spanish language cover of a Creole/Zydeco hit originally penned by one Sidney Simien (Rockin' Sidney, or Count Rockin' Sidney), and known as "My Toot Toot." That English version, incidentally, has also been covered by various artists all over the world, not the least of which, and especially important to me, was Denise LaSalle, one very serious Bessie Smith wannabe. You should be able to hear "Mi Cucu" at this URL: http://www.fulltono.com/detalles.aspx?idm=43423